Is the French adjective “savoureux(se)” ever used to mean “salé(e)” or "non sucré(e)" to describe food?

Is there any evidence of any usage in any francophone country to indicate that the French adjective “savoureux(se)” is being used to replace the adjective “salé(e)” or that “savoureux(se)” is being used to mean “non sucre(e)” to describe food, similar to the phenomenon occurring in American English described below, and if this is happening in the French language, are there any linguistic or etymologic justifications for it?

Over the last 5 to 10 years in American English, makers of certain foods/snacks (and their marketing associates on Madison Avenue) have accomplished a brilliant “coup” by successfully replacing an adjective that is considered evil by the growing number of health-conscious people in the U.S.A, (i.e.. “salty”) with one that theretofore meant “having a pleasant taste or smell” to the vast majority of American consumers, (i.e., “savory”).
Salty snacks are now called savory snacks; salty crepes are now called savory crepes; essentially anything that isn’t “sugary” or “sweet” is now called “savory.”
(My favorite bar is even considering changing its name from “The Salty Dog” to “The Savory Dog” and worse yet, shutting down its smoking section. Needless to say that I won’t return if any of that happens!)

[Please note: I'm NOT asking why this is happening in the U.S. because I am aware that the British meaning of their "savoury" has long included 'not sweet," and that the Japanese translation of "savory" (the plant) is "Umami", giving justification to people less skeptical of 'Madison Avenue' than myself to cite either or both of these two facts to explain the phenomenon I describe]

[Please note also, that I did do some research (see below) on my own before deciding to ask my question here, and I did find a reference to “du sel” at “Trésor de la langue française” under “savoueux(se),” but it wasn’t under the “food/drink” definition. It was instead under the figurative definition for “things” (other than food or drink, perhaps??) and “people” so I really don’t think that the answer to my question could have been easily found in a dictionary (either by inclusion or omission)]

(Other than the "du sel" mentioned in the heading above, I could find no other reference to nor examples using "du sel," “salé(e),” or "non sucré(e)" under this definition)

(One final note of a personal nature: If this has started to happen in French (and if there are no linguistic or etymologic reasons for it), please fight against it in the name of all things good and salty!)

I've never seen savoureux being used to denote one of the basic tastes. The classical four basic tastes are sucré, salé, amer, acide, to which it is now common to add umami. Umami is sometimes translated as savoureux, but that's rare in my experience.

I've never seen savoureux being used to denote one of the two food classifications from 18th century French cuisine. It's always salé and sucré. Main dishes are salé (whether they are prepared with salt or not), desserts are sucré, bread and water are neutral. The adjective savoureux denotes anything especially tasty, whether it belongs to the salé or sucré group. The Dictionnaire de l'Académie française cites both “viandes savoureuses” and “fruits savoureux” as usage examples, showing that savoureux also applies to sweet foods. Similarly the more modern Trésor de la langue française gives the examples “fruit, gâteau, morceau de viande, vin savoureux”.

Québec French doesn't seem to have diverged on this. The Grand Dictionnaire Terminologique article for “saveur salée” or “goût salé” provides the definition “Savory : giving a relish, salty and not sweet.” and gives “savo(u)ry flavo(u)r” as the corresponding English term. The only entry for savoureux is about wines (“gorgeous”).

So no, savoureux does not ever mean salé, on either side of the Altantic.

(By the way, in English, savo(u)ry meaning salty/main-dish in the savoury/sweet duality is not solely American and is far more than a decade old.) 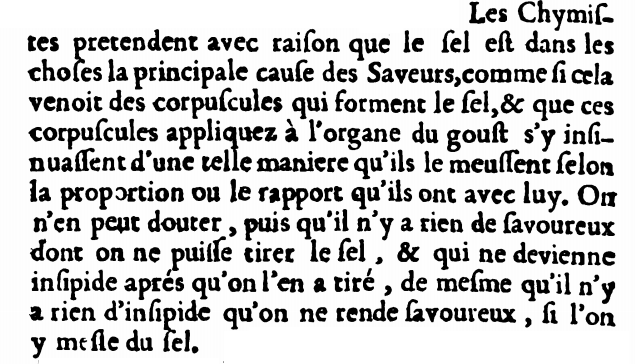 Not the answer you're looking for? Browse other questions tagged sens usage or ask your own question.

10
Is it ever appropriate to hyphenate a verb phrase in French which is used like a single word?
10
Why is the passé simple not used in spoken French?
7
Meaning of adjective "propre" in 1885 engineering text
4
What does “vit des femmes” mean in “Dans le quartier, on dit qu’il vit des femmes”?
6
The use of "slam" in the context of poetry and poetry competitions 'dans la Francophonie'
5
Do French use Madame to describe non-married women?
4
What does "la" mean in Canadian French when tacked on at the end of a sentence?
2
"Si on n'était que douceur avec elle": meaning and construction?
0
Usage of the number "101" in French to mean introductory level of learning or the most basic knowledge of something
0
The meaning of the french verb "Zoner" & the adjective "tanqué"