How to translate Willow Hair in french

This question illustrates many of the difficulties of translation. You can't hope to take a phrase and transpose it directly into another language. You'd like to preserve the construction and the literal meaning and the connotations but sometimes one of these is the best you can do.

It appears that you're referring to a hairstyle. The French word for hair as in one strand of hair on a human's head is cheveu. However, to refer to a person's hair as in the whole set of hair they have on their head, you have to use the plural: cheveux. For example, if you want to say that somebody has dry hair, you'd say “il a des cheveux secs”. You can also use a different word: chevelure. But neither of these words is commonly used for hairstyles if the style is the result of cutting the hair: instead, we say “une coupe …”, where coupe (a cut) is to be understood in context to refer to a hair cut. If the style is a result of doing something to the hair, cheveux is the natural term. Cheveux can also be used when referring to cutting, for example in “cheveux longs” (long hair) and “cheveux courts” (short hair).

Referring to a haircut in the name of a hairdresser's saloon would make sense. For beauty products, it doesn't make so much sense.

If you want to translate “haircut/hairstyle of a willow”, you can use

All of this is not very relevant if you aren't actually trying to refer to a hairstyle and instead just combining two words to look creative.

I looked for images of a willow hairstyle and this is a representative sample of what I found (computer model by Xandher): 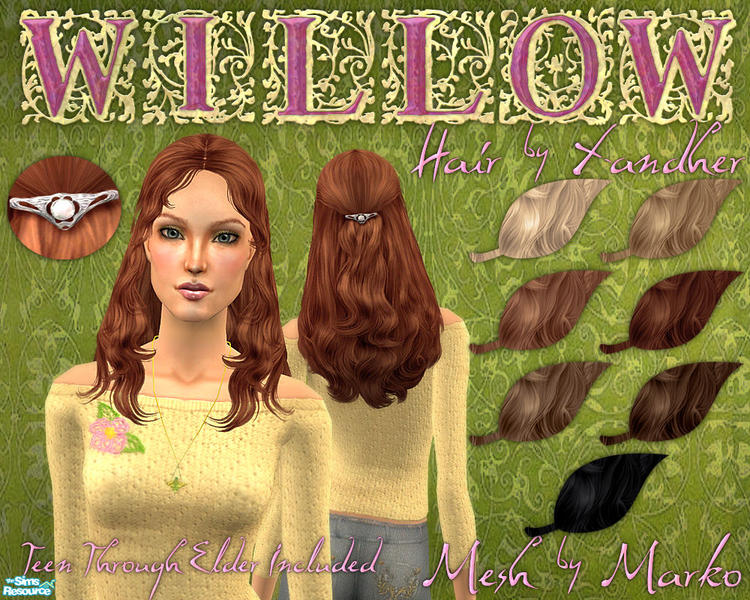 From this and other examples (1, 2, I don't see a difference between “willow hair” and “wavy hair”. Wavy hair, in French, would be “cheveux ondulés”.

If you want to translate “willow hair” using a more precise or less mundane term than “wavy hair”, you'll run into a cultural problem. For a French person, the willow metaphor is pretty unambiguously negative. If you tell someone they have hair like a willow, they'll think you called them ugly. Hair like a willow evokes the branches of the weeping willow which are just dropping there. The fact that it's called a weeping willow (same literal translation in French: saule pleureur) doesn't help. Examples: “get rid of the weeping willow look”, “avoid (…) very voluminous cuts (weeping willow effect)”.

For a brand name that's supposed to evoke beauty, don't evoke the looks of a weeping willow.

Brand names are rarely translated literally. You have two choices:

Not the answer you're looking for? Browse other questions tagged traduction coiffure or ask your own question.

28
How can one say “good morning” in French?
27
How would you translate 'placeholder' to French?
17
How to translate “to parse” or “parsing” in French?
3
How to translate some technical words from English that do not have a good translation?
2
Translation for “it's a number that symbolizes how similar objects i and j are”
2
Is there an equivalent for “damn it” in French?
2
What is the most natural way to say “But, with some caution”?
3
How to say, “Pride makes other people feel bad about themselves”?