What do these phrases mean? (from Noces)

I read in this essay the following and I do not understand what they mean to express, even after looking up all the words I don't know in the dictionary. Please point me in the right direction.

The first part of this seems to read "the countryside is black...", but after adding the "de soleil" bit I am not sure what it is supposed to express.

I understand the first part as saying "the black mass of Chenoua take root in the hills outside the village" and the next part seem to mean something like "and sets out in a sure and heavy rhythm to the sea", but I'm not sure of its exact meaning.

This seems to describe roses clustered together since I think épais means bushy. But why the use of "comme de la crème" at the end? What is that supposed to mean? And is the word "thé" to describe the colour of the roses or something else?

First, be reassured: you picked a quite difficult book.

The countryside is black with sun

The question has been asked elsewhere and the answer. "Noir de soleil" looks like a common French expression: "noir de monde" ("black with people"). It means there are so many people you cannot even see the place you are talking of.

Adapted to this case, it's a figure of speech to say the countryside is not only bathed in, but flooded with sunlight.

… the black mass of Chenoua which takes root in the hills around the village and sets off in a sure and heavy rhythm to go squatting in the sea.

Here again, the difficulty of understanding is due to a figure of speech. Though Chenoua is a mount and therefore is not likely to move anytime soon, it is described as such.

What you should read here (if I am not mistaken) is that the roots of Chenoua are in the hills, but its slopes go down to the sea.

… an abundance of Tea roses, thick as cream, …

This is a species of roses. Wikipédia describes them as hybrids. On English Wikipedia, they can only be found as hybrid tea roses.

Looking at a picture of one species of tea rose (see below, CC-BY-SA Stan Shebs), I suppose "thick as cream" refers to the texture of the petals, evoking something like velvet. 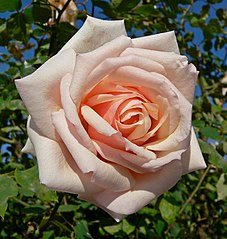 I have personally never heard noir de soleil as a common expression. While it works for noir de monde it makes no real sense when associated with the word sun in a common sentence.

In the essay you mention, it takes another dimension. Here noire de soleil would make me think about both the sun being very present, hot and eventually the fact that the sun is even somehow burning the countryside (hence the reference to black).

In common language, noir de can be used with monde (people) or objects, animals, etc.

But I would definitely not use it in conjunction with something that is typically not black or close to black, although one would probably understand the meaning of your sentence.

Not the answer you're looking for? Browse other questions tagged sens littérature or ask your own question.

3
(L'Étranger de Camus) Use of preposition "pour" in "Je l’avais pour ainsi dire oublié"
1
What do "en" and "y" mean in these two sentences?
3
« On s’était plus ressemblant à une Zero »
4
What exactly is an « espèce de perspective »
1
What does "pali" mean in this context?
2
"apprêts": what does it mean here?
4
J'en ai déjà entendu parler de cette région du Nord Ouest de la France -- I'm not sure what this sentence is saying
2
Nuances with subjunctive and indicative usage
1
What does "brezinzin" mean?
0
What does "pirette/pyrette" mean?