Stack Overflow for Teams is moving to its own domain! When the migration is complete, you will access your Teams at stackoverflowteams.com, and they will no longer appear in the left sidebar on stackoverflow.com.

Check your email for updates.

In most use cases, there would be no ambiguity. The context will generally rule out the strictly correct option if you talk about prices or actual quantities :

Same for Un million dix to Un million quatre-vingt-dix neuf, they might be too rarely used, if ever, to deserve being mentioned.

When you really want to tell 1 000 001, you certainly can use un million et un but with something to qualify last "one":

One can also say the unambiguous :

To be sure people understand what I meant, I would say "un million-et-un".

After carefully considering a very insightful answer, I suggest the following:

The reason is that I1 equate the understanding of "un million un" as 1 100 000 to a limited context: the approximation, and mostly if not entirely about monetary value. Put differently, I see this as a setup where the unit is pinned to the millions2, with 1(me) up to 3(OP, linked A.) significant digits following. The focus is on a final upcoming component to complete the string and get an idea of the value. If it's one, it's one hundred ; if it's one hundred, it's also one hundred; and those are all thousands3. This sort of usage cannot yield a more precise number using its system (1 200 234 ; un million deux[-cents] [pause/et?] deux-cent-trente-quatre ?? ; this is similar to the string decomposing required to qualify and read big numbers, but without following through with placing mille anywhere). The precision level stemming from this monetary value context can be dispelled imho using a precision bearing adverb (exactement), as introduced in the answer I alluded to, but without resorting to the conjunction.

The following are considerations about a solution (un million et un) appearing in every other answer and which showcase the underlying logic prompting this conclusion (and subsidiarily my belief that using the conjunction is not standard and is reminiscent of artifacts of old).

Using the conjunction et with integer numbers to escape the shortcomings of the proposed usage is not mainstream. Moreover, it ignores the classic grammar rule from Antoine Oudin's Grammaire françoise (1632) which states that using the conjunction is for speaking convenience and shouldn't be used within numbers except those under 100 for some of the tens of starting with one (vingt-et-un, not vingt-et-deux; see also, modern: 1, 2, 3; number to text: 1, 2) : 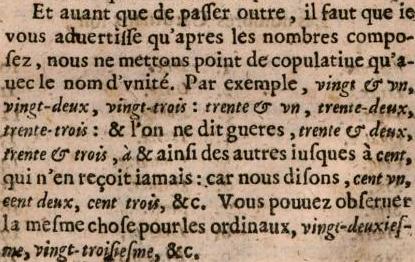 Le bon usage (Grevisse et Goosse, ed. Duculot, §593, note H) explains this was mostly followed in the 18th even though there was still uncertainty later on, admittedly even in the 20th. It quotes for instance the 1846 Bescherelle grammar which allowed for "vingt-un", "trente-un" (up to 60); in that case the uncertainty was not so much about adding extra conjunctions, but rather about not using them at all in cases which are mostly completely settled today. There used to be a time when :

...was quite usual, but that Latin influence has come and gone and numbers are no longer constructed like so. The addition (as opposed to multiplying) process of number generation mostly involves the use of the dash (trait d'union), not that of the conjunction; it is not an arithmetic looking process like the old Latin inspired forms. The conjunction and the dash are also used to establish subtle differences between a number and an arithmetic operation post-Reform; fractions and such won't be discussed further.

Which is not to say that you can never have the conjunction with numbers above 100. Les mille et une nuits, Les mille et un jours, are titles of literary work, whereas mille et trois has specific connotations related to the don Juan in literature. Otherwise you can also have "mille et un" and "cent et un" in some generic indeterminate way to express a large number as opposed to any accurate one. Of course there are further exceptions, including to this indeterminate nature itself : "Mille et un francs" (Pagnol)4. But in my opinion, the field is crowded and this creates potential interference with sequences containing et un (especially) or et trois as opposed to the others, and therefore is not uniform or predictable. If someone tells me "un million et une... idées", I perceive it as a variation on mille et une, not "un million une".

2. This "pinning" to a unit reminds me of the leeway we have with certain elements in a context such as a table or statistical documents; for instance using the currency sign and expressing values as millions or milliers; I acknowledge we're talking about the spoken language in this Q but such tables are often about approximations with a set number of significant digits.

3. It's useful to keep in mind that mille is not like millier and million: it is ever so rarely a substantive, except for the distance unit and few other exceptions (des milles de boîtes à remplir, old/rare/regional; other example). Mille is not a substantive in a number; and there is no plural agreement. There are intricate implications when mixing numbers and words to devise written words; for instance you would not write: 2 millions 300 mille dollars. I want to stress here that this has nothing to do with grammar; it is about "display logic", typography and acknowledgement of the nature of the numeric adjective "mille".

If you are in a context in which you only mentioned big round numbers like 500000 or 3000000 and you suddenly need to read out 1000001, I'm afraid you cannot avoid some very cumbersome description like:

“Un million-et-un” is a bit odd but not unbearably so. If you make a short pause between “un million” and “et un” (and perhaps a brief hand gesture to explain “at the end”!), it could be effective.

After researching this question outside our community, I have come to a strange realization:

15
How do you say “the 2nd most practiced religion in France”?
1
Should learners try to use more filler words?
5
Problemes de liaison how does one say 4 eyes in French
1
How would you say Season 1 Episode 1?
3
How to casually say "on three" in French? Which preposition to use?
2
How do the French people typically say, 'has had its moment'?
1
Is it possible to say "soixante-vingt" instead of "quatre-vingt" ? What would be the reaction of native speakers?