I'm reading through a French engineering text from 1885 (Application des potentiels à l'étude de l'équilibre et du mouvement des solides élastiques by Boussinesq) that uses a couple symbols I don't quite recognize. A page snippet is below, with extra text included for comparison: 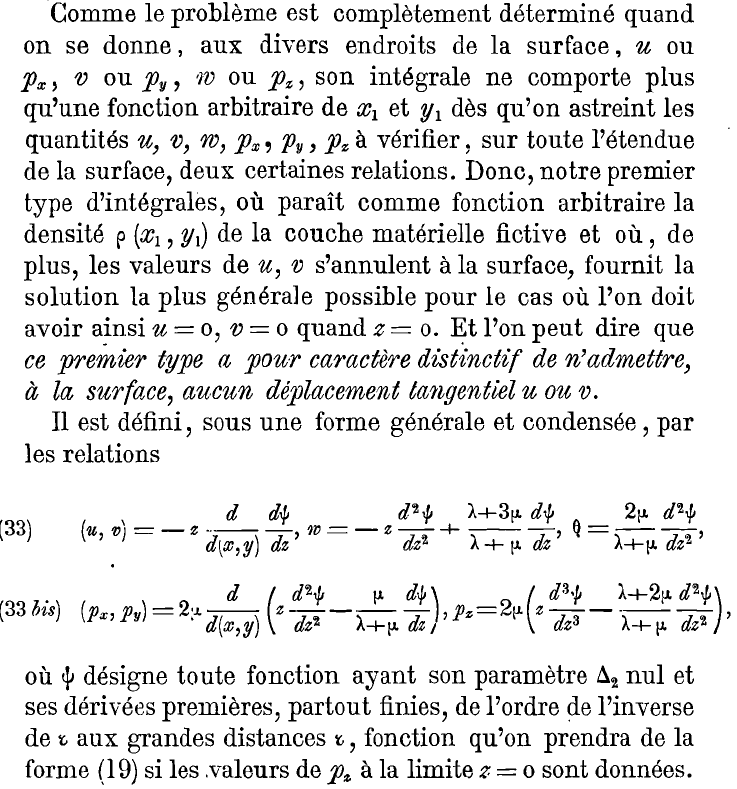 The two symbols I'm having trouble with are

I thought the first one could just be script "n", but I'm not so sure. For example, the "u" and "v" symbols used match exactly the "u" and "v" characters used in the italicized text. If it's a Greek symbol, my thought is that it's an eta, which resembles an "n."

The second one looks to be a script "r", though it doesn't resemble the italicized r's in the text. My other thought is that it's a stylized iota.

Any ideas what they could be, given the timeframe of publication or other French stylistic idiosyncrasies of which I'm unaware?

is a stylish w.

is a lowercase r

Note: I deduced what these letters represent from other parts of the document and well known formulas:

Not the answer you're looking for? Browse other questions tagged mathématiques typographie alphabet or ask your own question.

10
Learning French to follow some mathematics texts
1
Is text commonly right-aligned in French?
7
“Inliers” and “outliers” in French
3
Is this spelling with long ‘S’s correct?
3
Correct way to hyphenate “bourguignon”?
2
Correct interpretation of “on y porte les valeurs” in a mathematical context
8
Why does French have letter é and e?
7
Fraction line in French
2
Is it common in French magazines for the page numbers to include the cover and inside cover?
8
French hyphenation in printed books and publications