I am trying to figure out what is meant by some antiquated expressions found in Mme. Motteville's memoirs, the phrase:

What is she saying here? To answer any questions about transcription, here is an image of the printed page (1750):

Well here is the Modern French translation of your phrase :

At first I thought tourmenter was meant to say harass -which is the case nowadays, but as @jlliagre said, tourmenter originally meant torture/torment.

Laffemas had promised the Minister that he would torment/torture him to the point to get from him pretty much everything he wanted to know about it, and that he would find, with only the few irrelevant things he would say, ways to sue him...

According to those who read the story, the sue him part is to take literally.

The scan you posted seems to be from a later reprint.

Here is the same sentence from the 1710 edition of the Mémoires d'Anne d'Autriche : 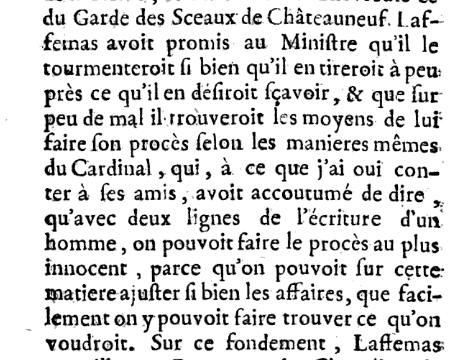 There is an additional archaism compared to your sample, savoir has the older spelling scavoir. However, à peu près is written the usual way.

This text is about Isaac de Laffemas who, as a judge attendant, was used by Richelieu to perform hasty justice. The indicted victim here is the Chevalier de Jars, who resisted to Laffemas harassment and never confessed anything. He was nevertheless sentenced to death but was pardoned while already on the scaffold. It was actually a set-up as Richelieu didn't really want him dead but only scare the Chevalier de Jars enough for him to admit being part of a plot, which he never did.

Et que sur peu de mal il trouverait les moyens... means that even while the indicted might say insignificant statements (peu de mal), Laffemas will manage to convert them to evidence sufficient enough to condemn him.

Some recent knowledge I happened upon courtesy of @Gilles leads me to guess that tourmenteroit is an archaic conditional conjugation of tourmenter, and thus the opening words mean "Laffernas had promised the Minister that he would torment him if..."

As for a-peu-pres, it is almost certainly an old-fashioned way of writing the modern à peu près, meaning "roughly" or "just about." I don't actually fully follow its usage here, I cannot make sense of that part of the sentence.

This is the only link I'm able to find so far on archaic conjugations -- if you expand the tables you'll see the complete conjugations. FWIW it really helps to know the modern conjugations very well-- then you can see that tourmenteroit is one letter off from tourmenterait, and it's not such a huge jump to recognize the meaning. But it also helps to have encountered archaic conjugations once or twice....then it becomes semi-obvious when you encounter them again.

It is said that once, Louis XVI's brother, who came back from a long exile in England to replace Napoleon after Waterloo and restore the ancient kingdom under the name of Louis XVIII (by mark of respect for the former king's son, who would have been Louis XVII if ever he had reigned) went angry because his ministers didn't want to accept one of his decisions. So, he said (suppose that "[rr]" means a rolled "r"):

By the way, the changing happened at the French revolution, when the "Incroyables" and the "Merveilleux" wanted to set their mark on the spoken language, so they replaced the old rolled "r" by the modern guttural "r", which happened to spread over Germany afterwards, and they changed the pronunciation of "oi" from "[ouè]" to "[oua]". It seems that the conjugational change from "oi" to "ai" took place by that time too, because in the texts from around 1750, "oi" is still fully used.

We can suppose that changing the conjugation from "oi" to "ai" happened for a phonetical reason, the will to simplify a diphtongue to a simple sound, since "oi" was a diphtongue ([ouè]) and so changing it to "ai" made the sound "[ou]" disappear, so it went from "[ouè]" to "[è]". In that hypothesis, the changing of "oi" to "ai" must have taken place some time before the phonetical change of pronunciation of "oi".

Not the answer you're looking for? Browse other questions tagged expressions-idiomatiques conjugaison francais-classique or ask your own question.