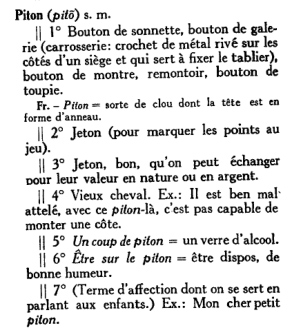 The use of the singular “au jeu” (instead of “aux jeux” or “dans les/des jeux) in the parenthetical in piton’s meaning #2 (3?): “Jeton (pour marquer les points au jeu)” could be an indication that the Glossaire intended to include (perhaps even exclusively) the kinds of jetons, regardless of their shape, used to “keep score” in nearly all casino table gambling games. If this is the case, then “banques à piton(s)/[jeton(s)” could be referring to the vault/holding place for the seemingly unlimited wealth possessed by seemingly unbeatable casinos.

Just as you mention/wonder in your question, however, the above doesn’t explain why just “banque” or “banquier” all alone wouldn’t work?
Personally I think either of them alone would work just fine, but maybe the addition of “à piton(s),” whether it’s referring to gambling jetons as I’ve suggested above or to “pitons échangeables,” as you suggest in the question, is serving to emphasize the notion of “[your private] bank/[your private] banker,” which notion of “private” is often included in the English “I’m not your private bank/er” to respond negatively to requests for money.

Regarding the use of “pitons” (only the nail-shaped ones, aka “pegs”) in games, for one where they’re used solely for “keeping score” (pour marquer les points), there’s cribbage (as described by Wikipedia) and for games where piton-like pegs are actually part of the game, here’s a link to BoardGameGeek.com that lists a few, including “Hounds and Jackals: Game of the Pharaohs,” “Peg Baseball,” and my favorite, “Battleship.”