How should I understand "il se suffira à lui-même"?

This question is from the following excerpt. One of the pronouns "se" and "lui-même" seems redundant. Can one of them be dropped without changing the meaning of the sentence? 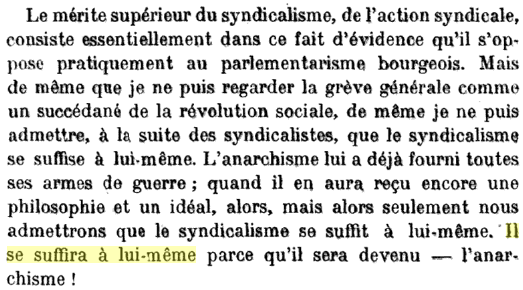 It could be translated as "make it on one's own".

In theory you could remove "à lui même" (since it is redundant), but the idiom is generally expressed in this way; so it's a guarantee that you are going to be understood. The repetition is merely an emphasis (like "make it on one's very own"; but there is no need to translate it in that way).

According to Larousse on-line "se suffire à soi-même" is an established expression [redundant or not] meaning “n'avoir besoin d'aucun complément, d'aucune amelioration,” and the example of its use given in my personal Le Robert-Micro is very similar to the one used by “Larousse*:
“Cette definition se suffit à elle-même.”

I’d probably agree that adding “à soi-même” for emphasis to “se suffire” when used to describe [the notion of] people as being “self-sufficient” might qualify as a redundancy (perhaps in recognition of this my Le Robert has “à lui-même” in parentheses in its example of “se suffire” when used with “personnes”: “Le pays se suffit (à lui-même) … pour l’energie”).
However, when the full expression is used with nouns for “things” (such as “syndicalisme”), the potentially-redundancy-causing notion of “being self-sufficient” is, in my mind, replaced by that of “being sufficient, in and of itself” or “being sufficient, [all alone] by itself.”

Granted, if your text had talked of “le syndicat” (which is comprised of people, just as “le pays” is in the Le Robert example) as being “self-sufficient” [to accomplish anarchy] instead of the thing/idea of “le syndicalisme” as being “sufficient, by itself” [to be anarchy], then I think there would have been a slightly better case for putting “à lui-même” in parentheses (à la Le Robert) or even for omitting it altogether.

3
Meaning of "même" in "Mon affaire suivait son cours, selon l’expression même du juge"
3
How should I understand this long sentence in Le Horla?
2
Understanding "que je ne lui avais pas encore vu mettre" in La porte étroite
1
How do I understand "C'était on ne peut plus plaisant"?
1
Question about "si" clause with present verb
5
How does the construct "n'en soulève pas moins" work?
3
According to the grammar system taught in the Francophonie, is "de + noun" an indirect object?
1
"Sembler à qqn" to mean something like "want", in "où bon lui semble"
5
What is the effect of the repeated (redundant?) "lui" in this passage?
3
How to understand and use « avoir que »?