They [the French] had the right to wait for the two candidates...

The expression is attendre quelque chose de quelqu'un: to expect something from someone so here des means de les, i.e. "They had the right to expect (an in-depth debate) from the candidates…"

To take up Stéphane's and Simon's analyses in the commentary, the correct parsing can be seen if the sentence is simplified:

You attendre expect quelque chose something de quelqu'un from someone, as jlliagre shows.

The direct object (un debat) here has been inverted, which is possible in both English and French.

Why is it inverted? Because the direct object must be qualified with a very long clause that would interrupt the verb's structure: attend qqch. de qqn. In other words, you want to get the shorter object out of the way first.

Here's an example in English; the register is somewhat formal or poetic, but it's acceptable:

We expect from this young woman achievements so wonderful that the entire world will take note.

Now compare it without inversion:

We expect achievements so wonderful that the entire world will take note from this young woman.

The same thing happens in your French example, except that the clause that qualifies this debate is much longer and makes the uninverted option that much harder to sustain.

The linguistic motivation I've heard for this phenomenon is that we have limited working memory for parsing sentences. In other words, you quickly need to hear both objects (at least the start of each) to satisfy the verb's requirements. If you're wading through a lot of words to get to the second object, then when you encounter it, your brain has a harder time identifying where to put it.

Note that an English speaker might be tempted to rephrase even the inverted sentence so that you don't have to wait for the direct object.

However, French is quite happy to move the direct object away from the verb. In fact, much less is needed to trigger this behaviour.

For example, a one-word adjective can be placed between a verb and its direct object, as in this image from this parser. 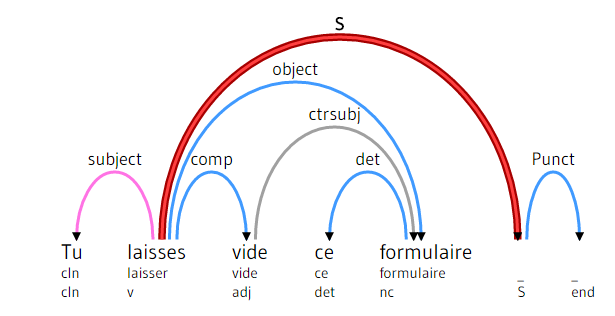 Other elements of the sentence simply cleave closer to the verb than the direct object does.

Always scan the sentence for a possible other object if one appears to be missing from the verb. In this case, if you read the sentence carefully, you notice that if you had les instead of des, then un debat would have no verb left to connect to either as object or subject. It would be floating around in a now-ungrammatical sentence.

It's also technically possible to read « un [debat des candidats] », but the inversion required for « noun de noun » is much less likely, less attendu, than the inversion of the verb's complements.

Not the answer you're looking for? Browse other questions tagged morphologie or ask your own question.