The reason I ask this, is because I seem to be finding some inconsistency as to which is used on the web. Reverso says for "Don't worry": 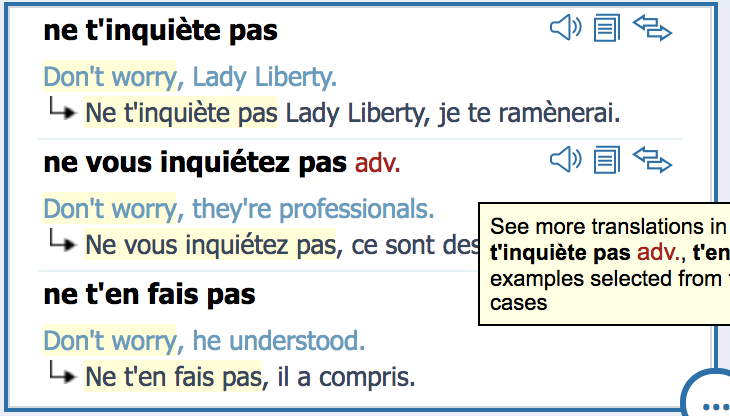 Where I'm seeing it conjugated correctly for « vous » but « tu » is looking more like that of « je ».

This conjugation site on the other hand is saying « tu ne t'inquiètes pas » which follows more as I would of thought: 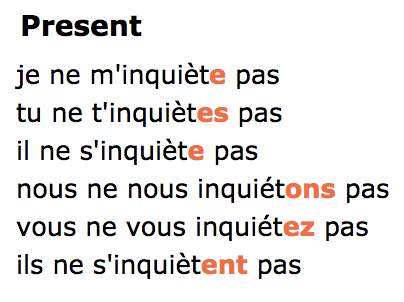 So my question is, what is the correct way of conjugating « s'inquiéter » for the phrase « ne t'inquiète(s) pas » ?

EDIT: I just realised too, how come the accent on the e changes for everything but « nous » and
« vous » to accent grave instead of accent aigu ?

The imperative form is "ne t'inquiète pas", no "s" needed, that would be an error. I think you are confusing the imperative and indicative moods, which in French follow different conjugation rules.

Good answers already concerning the mood, which was imperative and not indicative. No need to expand for too long, the S is dropped from the second singular person final for the verbs in -ER in this mood.

I’ll concentrate on your question about the accents varying for every person but nous and vous in the indicative present. It has to do with the pronunciation. When the T-sound is the last one in a conjugation of this verb (we except the E caduc), the É-sound1 preceeding it turns into an È-sound2, and the accent is changed accordingly. French in general doesn’t have very many cases (if any) of words ending with the É-sound + a consonnant3.

Though there are variations in the way É and È are pronounced, this verb follows the general trend.

1 [e] in the international phonetic alphabet.

2 [ɛ] in the international phonetic alphabet.

When you use the expression (ne) t'inquiète (pas) (no 's' here), the used mood is called impératif in French :

In this case, we don't use the mood indicatif (as you said):

So here we use the negation of inquiète-toi which is ne t'inquiète pas and became t'inquiète.