understanding a passage with "tenir" as well as "en prenant"

The following passage confuses me a lot:

I go to wordreference's page for "tenir". To understand what it means to "tenir" "les hanches", I look at all the entries that are marked "vtr" (transitive verbs), which, if you mouse over the "vtr" symbol, wordreference indicates that a "vtr" takes a direct object. I conclude that to "tenir" the hips is to grab hold or take hold the hips.

Then, to understand "lui", I look at all the entries that have "à qqn". I conclude that it could mean "to [physically] cling or stick onto someone", or "to mean a lot to someone". Given that this passage is a physical description of what's happening during sex, I'm guessing that it's the first.

So, so far I have "I held firmly to his hips and clung onto him". So far, so good. But then I question whether this is a correct translation, as I translate the rest of the sentence:

How does a person both hold firmly onto someone's hips, while also holding onto your own foot [?!] ? And why does the narrator even mention "en prenant [..] lui" in addition to saying "je lui ai tenu" -- isn't this redundant, given they pretty much mean the same thing ("while holding onto him" and "I clung onto him")?

3) Strangely, the next sentence also mentions holding onto a foot:

"he was really holding onto his foot".

At this point I'm suspecting that "prendre son pied" is an expression, but neither linguee.fr nor wordreference seems to confirm this.

Questions:
1. Is my guess of how to translate "Je lui ai tenu fermement les hanches" correct? Is my understanding correct that, when I look in a dictionary, that I need to look for entries in a dictionary that say "transitive verb" to understand the direct object, and to look at entries with "à [qqch/qqn]" to understand the indirect object?
2. Is it true that "Je lui ai tenu" and ".. en prenant [..] lui aussi" is redundant?
3. What does "prendre son pied" mean? Is there a way I could have looked this up, myself?

Your strategy for understanding tenir is a good start, but you shouldn't combine two definitions where one takes a direct object and the other an indirect object. Instead, if the verb can take both at once, you'll find an entry that shows both.

For example, here's a WordReference subheading for donner that accounts for each object in this complex-looking set simultaneously:

So why does your tenir have both a direct and an indirect object if there's no subheading tenir [qqch] à [qqn] ? Answer: lui identifies the owner of the hanches. This would be hard to interpret until you know this pattern: Body parts can be connected to their owner by an indirect object.

So the phrase you quoted is like « J'ai tenu fermement ses hanches » (if you could say that).

You were right to suspect that this odd-sounding position is due to its being an idiom. I'm not sure why your search on WordReference failed to turn one up. Here's the entry:

have a blast, have a great time, have a ball

I switched the language to French-English and watched for new suggestions as I typed each letter. 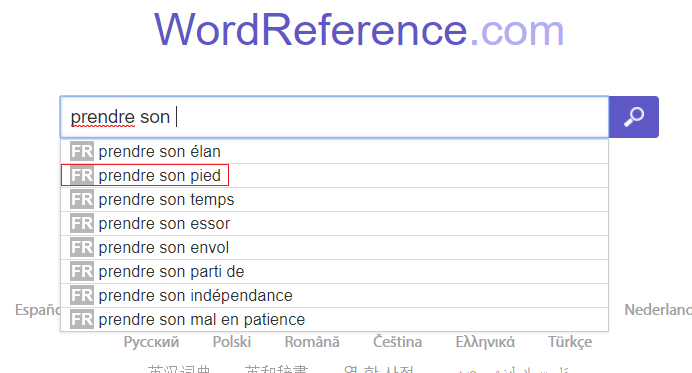 Not the answer you're looking for? Browse other questions tagged grammaire vocabulaire dictionnaires or ask your own question.

7
(L'Étranger de Camus) The usage of "se" with "laisser + faire"
5
Explication de « lui dit-il » et « lui dit-elle »
3
How can I parse "lui faire tomber le masque"?
4
How to translate "It's him who I want to give me a massage"?
4
Understanding "de près" and "en" in this advertisement?
1
How do I know whether to use "de" or "à" for the transitive verb "attendre"?
4
How can I tell whether the reflexive pronoun is direct or indirect, for verbs that are always pronominal?
1
Questions about if French-English dictionaries will always tell me the prepositions I'm required to use for indirect objects (Penser à/de, Porter de)
2
How can I use a dictionary to tell me what kind of indirect objects (if any) that "cracher" can take?
1
"Sembler à qqn" to mean something like "want", in "où bon lui semble"