What is the difference between horloge and pendule?

What's the difference between horloge and pendule? All I know so far is what is given on Collins English-French dictionary: https://www.collinsdictionary.com/dictionary/english-french/clock.

The most common word for “clock” is horloge (une horloge). Any device whose purpose is to tell the time can be called an horloge, except for small ones that fit in a pocket or are worn around the wrist: those are called “watches” in English and montres in French (une montre). An alarm clock is un réveil; you'd only refer to it as horloge if you were using it to display the time and you weren't using its alarm functionality.

The word horloge is also used for a part of a device that tells the time, for example for the clock on a video recorder or a kitchen appliance, or a clock application on a computer. A device whose purpose is to keep the time (but not directly display it) is also called une horloge, for example une horloge atomique (an atomic clock), or the clock of a circuit in electronics.

Une pendule is a particular type of clock that uses a pendulum (a pendulum clock). A pendulum is un pendule (masculine), a pendulum clock is une pendule (feminine), originally short for “une horloge à pendule”. More rarely, the word pendule can be used for any kind of horloge in the sense of a device whose sole purpose is to tell the time. You can use pendule for an electric clock, but not for the time display on an appliance.

The characterisation of horloge as “large” and pendule as “small” in the Collins dictionary makes no sense at all. If anything, a pendule would tend to be bigger; the less a clock looks like a pendulum clock, the less likely people are to call it pendule.

Both display the time.

A pendule (feminine) is an increasingly rare kind of horloge which works thanks to a pendule (pendulum: masculine).

On the other hand, horloges can use anything like springs or electricity to operate. 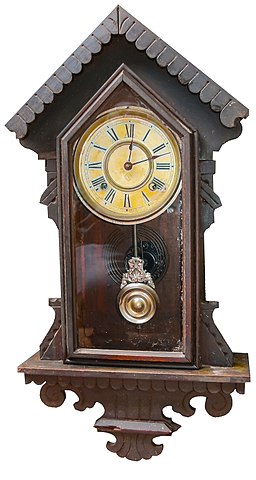