At the grocery store earlier today, I saw these diapers for sale: 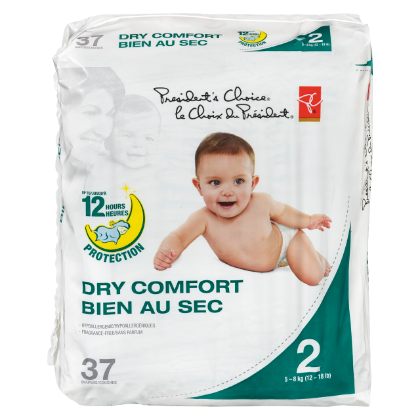 I see that wordreference's page for "sec" has "au sec", which is an adverb meaning "dry". (I also see that its page for "bien" has an entry that is an adjective that means "comfortable").

Questions:
1. Does "bien au sec" altogether act as an adjective, meaning "comfortable, in a dry way"?
2. Is it common to make other adverbs using "au [or 'à la'] + adjective"? If so, what are some other examples of this?

It does work more or less as an adjective meaning "in dry conditions".

This seems to be a construction used only with a few specific adjectives that have to do with the conditions a thing is in: au frais, au froid, au chaud are the ones that come to mind.

What's the distinction between garder sec and garder au sec? The former uses sec to mean the state of being dry: keep it dry. The latter uses "au sec" to mean a dry environment: keep it somewhere dry. (Thanks, jlliagre!) I suppose the President's Choice considers that the baby's comfort depends on the whole surrounding dryness. :)

Outside of this usage, note that one reason you might not find the constituents listed as nouns in all dictionaries is that French is quite free with using adjectives as nouns, or substantifs.

For example, in English we can say "I give to the poor," where "the + adjective" means "the poor people". In French you can do that too. But if you wanted to select a subset of objects, say only the ones that are blue, the language seems to resist and encourages an adjectival use: "I want the blue ones." In French, au contraire, you can say, "Je veux les bleus."

Similarly, you can use an adjective as a mass noun in English: "I want to keep the beautiful and throw out the ugly." In French you can do that too. But if someone asks, "Which shirt do you want to keep?" You have to reply, "The beautiful one." In French, you could say, "La belle."

All this to say that “le + adjective” is a fairly productive process. (But with this particular meaning I do suspect that it's limited to the expressions above.)

Not the answer you're looking for? Browse other questions tagged prépositions adjectifs substantivation à or ask your own question.

11
How do French people turn nouns into adjectives (of a sort)?