The cover of my round tupperware (ie, reusable plastic food container) says the following: 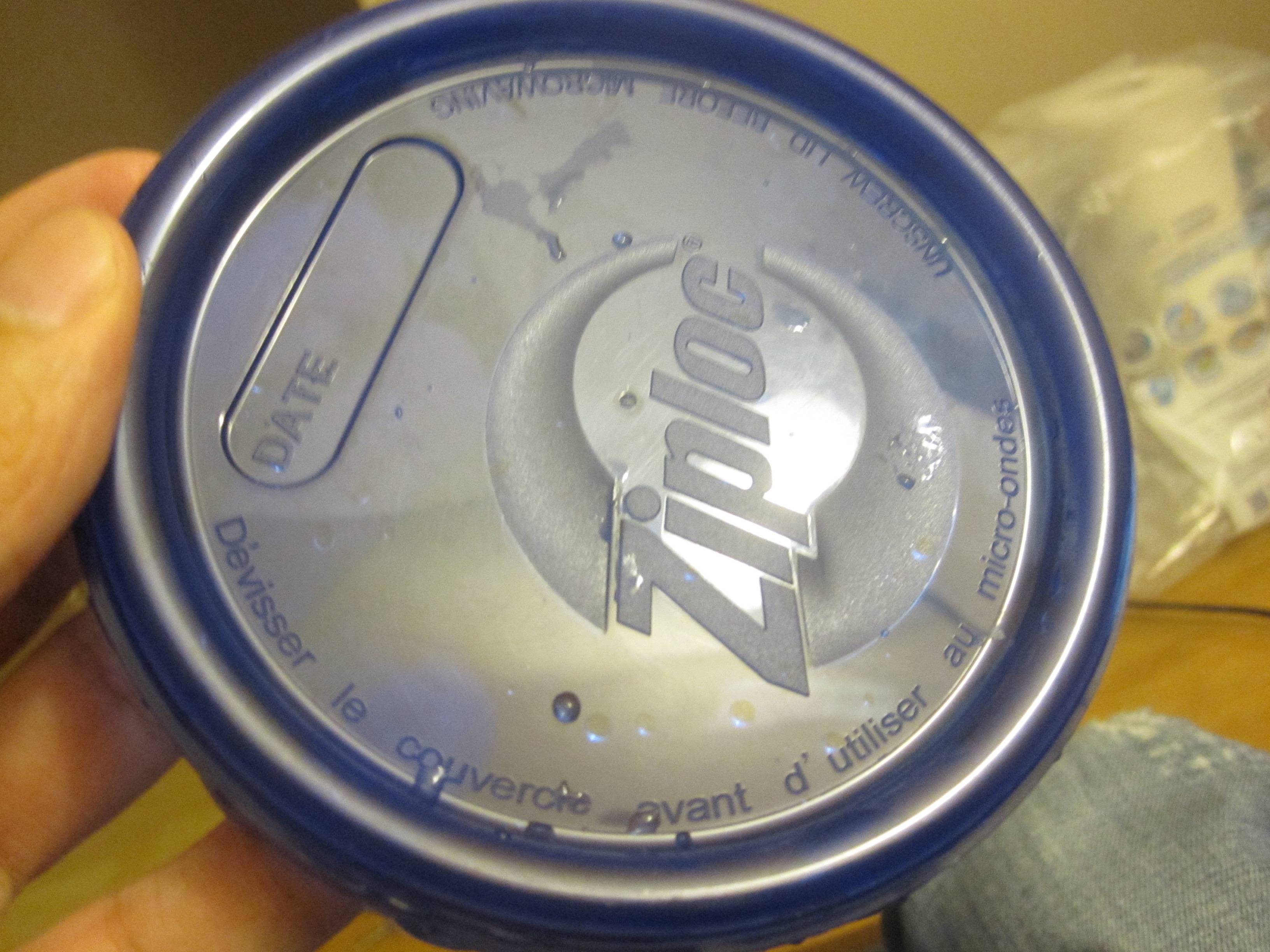 This brought a number of questions to my mind.

The wordreference page for utiliser doesn't really help me understand what prepositions can follow after "utiliser". (In fact, the example sentences only have "utiliser" followed by "pour" -- never "à"!)

I can certainly guess what "utiliser au micro-ondes" means, especially given that the English is there, too. But I would prefer to learn some grammar / principle underneath this, rather than guessing.

I don't think English would say "using in the microwave". Does French use the word "the" in a way that sounds strange in English?

I learned that French often requires some kind of object, where English leaves it out:

I had come to think that French always requires this "fuller" sentence that includes the object. So I'm surprised that it's "utiliser au micro-ondes".

Utiliser does not take an indirect complement, so there is no preposition that is particularly associated with it. The following complement is a complément circonstanciel, not a complément d'objet indirect.

Utiliser normally takes a direct complement. Here, it is implicit: the direct complement is the object that the warning is on. The English version uses the same construction: “microwaving” could be replaced by “using in the microwave”.

A literal translation of "in a microwave" would be "?dans un micro-ondes", but it doesn't quite have the right meaning. It implies that the object is placed inside the microwave but not that it's used for cooking. The preposition dans would only be used to refer to the physical location of the object, not for its purpose (“Où est mon déjeuner ? Ah, il est dans le micro-ondes, j'ai oublié de le sortir.” = “Where's my lunch? Oh, it's in the microwave, I forgot to take it out.”).

"À un micro-ondes" didn't have the right meaning either. You can't use the indefinite article here because that would refer to one specific, but not yet specified object (“Y a-t-il un micro-ondes dans votre cuisine ?” = “Is there a microwave in your kitchen?”).

Articles and preposition vary a lot between languages and you can't expect simple translations like "à always corresponds to this preposition" or "if there's a definite article in one language then the other language will also use one.

As for the noun micro-onde itself, it has two meanings, like "microwave" in English. It's a term in physics to designate a type of waves, and it's also a type of oven that uses this kind of waves. The noun onde is feminine, and so is micro-onde in the physics sense since adding a prefix doesn't change the gender. Micro-onde as the kitchen appliance is masculine because it's short for un four à micro-ondes.

"Utiliser avec des gants" = "Use with gloves / while wearing gloves"

but never "utiliser à [an object]"

(again, "utiliser à un micro-ondes" doesn't really mean anything, it wouldn't be used in French and would be considered a grammar mistake)

It's not always true indeed... you could say "je sais !" , rather, "je le sais" can feel very redundant.

In french grammar, there is a notion of "direct object" and "indirect object" that will complement the subject+verb and they can often be dropped from the sentence in shortened, more idiomatic forms.

In "utiliser au micro-ondes", "au" is a sort of shortened "dans le" (which, again, would not sound very good in French), so it already is the "object" and a "fuller" sentence would not sound as smooth and natural.

Not the answer you're looking for? Browse other questions tagged prépositions or ask your own question.

11
When would one use “à” after a noun and before an infinitive?
2
En dehors de l'etudie / sous mon professeur ?
1
Resources that contrast and explain how to choose prepositions?
2
Using d' and l' over multiple lines
4
Can “pour” be used at the beginning of a sentence?
3
“être de” with money?
1
Can “verb + de” or “verb + à” ever be split up?
3
Question about grouping ambiguity when parsing sentences with many *de* words
2
What does “Aux à la” mean?
4
Preposition between verb and l'air