Is the Faverolles breed of chicken always written with an “s”, and why, if so?

In the US, there is much confusion about the correct spelling of the Faverolles breed of chicken. Many sites considered to be informed do not acknowledge that the "s" belongs at the end of the breed name. I was told that anything named after a place (such as the village of Faverolle) must end in s.

According to Wikipedia, several municipalities in France are named Faverolles (with a final S), and Faverolle (without the S) appears to be a minor stream only. Most likely the name of the place the chicken breed originated from did have a native S (not to be pronounced in French), and its presence at the end of the name has nothing to do with the English language adding a possessive S to the original French name (a feature that does not exist in the French language).

This chicken breed, called "race de poules domestiques" in French does come without doubt from a place called Faverolles; this is indicated in the French online free encyclopedia, in the section called "Autres". There are 2 such breeds and both names take an s : "Faverolles allemande" and "Faverolles française".

The "Faverolles française", also called "faverolles" originated in Faverolles, name of a village (population 900) and name also of the smallest administrative territory this village is found in (commune in French), this "commune" being in the "département" called "l'Eure-et-Loir" (near Paris). The "Faverolles allemande" was originally a sub-breed of the faverolles that has been raised in Germany since 1912. 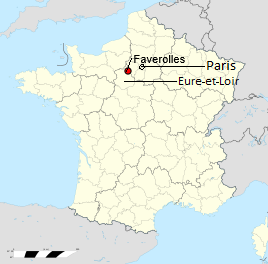 Not the answer you're looking for? Browse other questions tagged pluriel toponymes or ask your own question.

3
Why is “Calais” not written “Calet”?
2
Why is it “Ils ont besoin de livres et de DVDs” and not “des livres et des DVDs”?
4
What is the difference between “Persan” and “Persique” in French?
0
Why do we use the plural of the definite article in the name of certain countries?
2
Why the singular for “j'aime le sport”, but the plural for “J'aime les voyages” ?
2
Why does it take a masculine single on the predicate in a sentence that uses a feminine plural as its subject?
3
Pronunciation of “œuf” in “deux œufs kinder” and “bœuf ”in “deux bœufs bourguignons” as an exception to silent /f/ in the plural
4
Why the plural in “être sidérés” ?