Is the pronunciation of "déjeuner" region-dependent?

It varies as well. My pronunciation is pretty close to /deʒəne/, that of currently the only other user to have answered here is /deʒøne/. That is statistically insignificant, but it seems to be a reduced version of the diversity one would find if randomely asking French-speakers about their personal pronunciation.

Indeed, to add to the variety already shown in the dictionaries, there is an inquiry about oral French, for which data acquisition is still taking place at this time (June 2109), but whose preliminary results shown on this page are already quite clear: 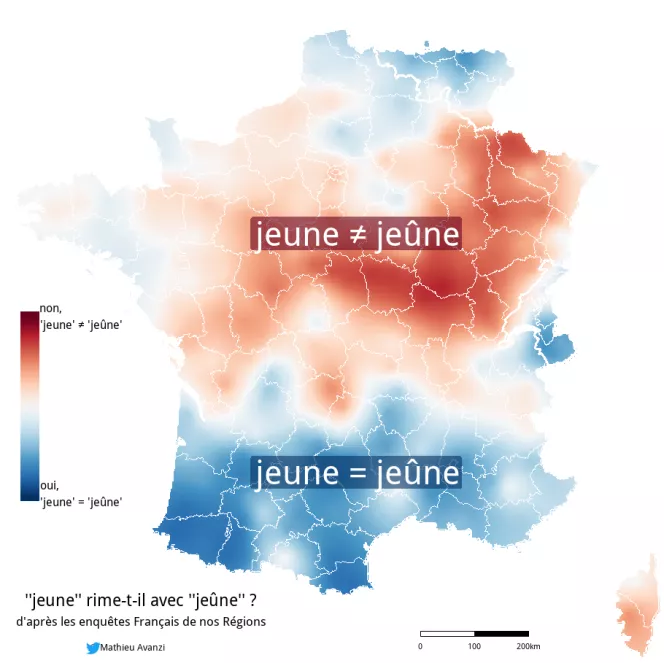 This simple picture using a two-colour scale might make it appear like a dipole where two linguistic habits are delimited, but reality is actually more complex. Two comments made below this answer hint at how diverse the local realities could be:

Belgium usually shows the contrast, but that pair is consistently realised [ʒœːn] or [ʒœ̃ːn] (and déjeuner has an /œ/ too), while the blue part of Switzerland has both as /ʒøn/.
—Eau qui dort

The Dictionnaire culturel en langue française, cited earlier, also have a special mention about the pair of phonems [œ] and [ø] at the beginning, where they present the pronunciation standards for the dictionary as a whole. It states that there are (as of 2005) two diverging tendancies at work in spoken French regarding these two phonems:

This can actually be used to further show how usage vary in the real world. To my French Canadian ears, all this sounded very strange, since the vast majority of Quebecquers will pronounce aveugler and all its conjugated forms as /avøɡle/, while we have a split lot over aveugle adjective or noun (I feel /avøɡl/ was more present up to the 80’s, before it started eroding away as /avœɡl/ was gaining popularity, but though the current state of affair might be transitional, both pronunciations are currently present).

It looks like there is no consensus, and therefore no right or wrong answer to this.

The best bet for a native speaker is to go with what they are used to or what they feel comfortable with given the immediate social environment.

For learners of the French language, it’s probably best to try to replicate the way it is pronouced by locals if on a visit, or by their teachers and/or francophone contacts otherwise.

As the TLFi gives /ʒœn/ for "jeune" and /ʒøne/ for "jeuner" and that I agree with that after having heard the vowels from the wiktionary, as the TLFi also gives /deʒøne/ for "déjeuner" with which my pronunciation also agrees, I think you should say /deʒøne/; however, it is quite possible to find /deʒœne/, that's the pronunciation of certain people in certain régions, although not necessarily of all; for instance this usage is asserted by the TLFi for "heureuse" : [øʀø], fem. [øʀø:z] ou [œ].

Not the answer you're looking for? Browse other questions tagged prononciation accents-régionaux or ask your own question.