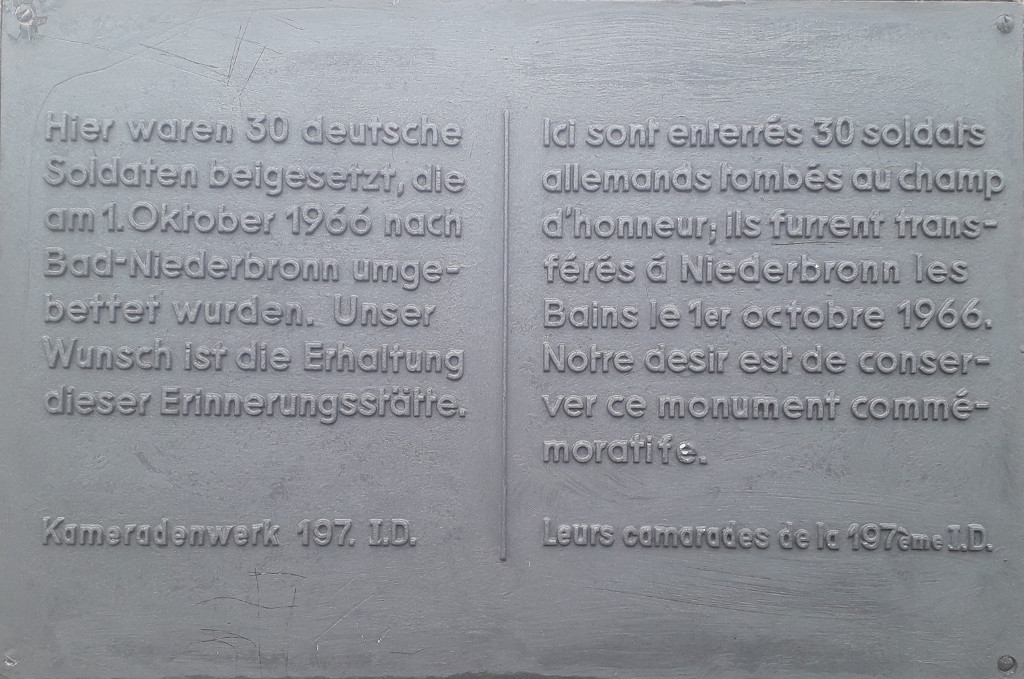 (i.e. the soldiers are still buried there in France and not in Germany)

Is the sign wrong or can the passive "être + verbe" sometimes mean the past?

Thanks for the replies.

The tense of the first verb is indeed incorrect. The remaining of the sign makes clear what the sign was meant to say.

Yes. This is called the présent historique/de narration which also exists in English (historical present).

While it is not the case in the sign you posted, small changes are enough to make it possible:

Adding en 1940 makes clear when that first event happened thus the present can't be but historical.

Note: the fact the French text uses a letter that doesn't exist in French (a with acute accent: á) clearly shows it has been written by a non native person with whom we definitely need to be lenient.

Note that there are other mistakes in this sign:

My bet is that the French text is simply a poor translation of the German text.

The translation from the German is faulty. Waren beigesetzt means furent enterrés, were buried.

What happened is the following, German soldiers who had died during WWII in the region were scattered in the various villages where they had been buried. In 1966, after an agreement between France and Germany was concluded, the bodies were transferred and centralised in Niederbronn, in the north of Alsace (https://www.jbs-niederbronn.de/fr/le-cimetiere-militaire-de-niederbronn.html).

I thought at first that they must have died at the end of the war in late 1944, early 1945 when heavy fighting took place in that area but the 197 I.D. (Infanterie-Division) (https://en.wikipedia.org/wiki/197th_Infantry_Division_(Wehrmacht)) was destroyed on the Russian front near Vitebsk in the summer of 1944. It's highly unlikely even remnants of it would have made it back to the Western front.

The only explanation is that the thirty fell during the Battle of France in June 1940 at the end of the Phoney War (la drôle de guerre). It appears that at the time the 197 I.D. was stationed near Saarbrücken near the Siegfried line and took part in the combats that occurred in the northern Vosges Mountains.

My guess is that that plaque is somewhere in the north of the Bas-Rhin département or more likely in the eastern part of the Moselle département. Maybe user53784 could tell us more about the picture.

I know I'm straying from purely language issues but I can't help being touched by that mark of soldierly camaraderie, mistranslations and all.

The translation from the German is inexact, yes. But the sign is not wrong, in that it says correctly what would be said on the same sign in France. A correct cultural translation, if not a linguistic one.

EDIT: Closer look at the German, @WoJ is right! If the soldiers were originally buried here but later moved, the sign in French is wrong. Ils ont ete enterres would be the right way to say it. Sorry... (should I just delete?)

8
Future in the past
3
How does the passé composé change in passive voice?
5
La voix passive interchangeable avec le verbe pronominal ?
1
Past tense passive voice for “être”
2
Present tense of the passive VS the perfect tense
0
Can the imperfect tense be used as the past tense?
0
Regarding the “être” verbs like “venir”, “sortir”: What are some examples where the present tense is used to talk about the immediate past?
2
How do I know which verbs I can conjugate in the passive form and which ones I can't?
1
Why the past conditional “J’aurais mis”?