And here is some of the dialogue of the French subtitled version. 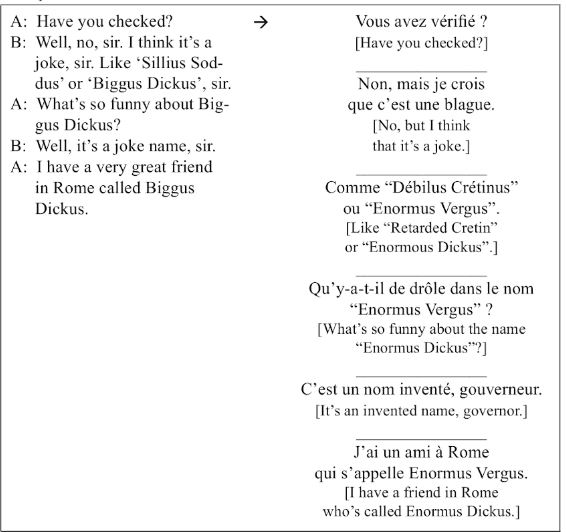 One notes that the " Biggus Dickus" name (quite obvious its "latinized" meaning:-)!) was interpreted in French as "Enormus Vergus". From where comes this "latinized" Vergus? Why should be regarded as funny by native French speakers? On the contrary the VF (French dialogues) has Bitus Grossus which catches better indeed the original Monty Python spirit:-)! Why the difference between the Vostfr and the VF?

verge comes across as a bit literary but I think its meaning as mentula is widely understood by native speakers.

Vergus has indeed a more Latin feel to it than Bitus. The Oxford Latin Dictionary has :

enormus does not exist in this form in Latin, the correct form of the adjective being ēnormis. One of the translators decided to go full dog Latin, or latin de cuisine, as in English and came up with Bitus Grossus, the other one wanted to stay closer to actual Latin with Enormus Vergus. I think both translations work equally well.

My best bet is that the spoken French dialog has Bitus Grossus because it better matches the movements of the lips when Biggus Dickus is pronounced.

The subtitles haven't this constraint and use Enormus Vergus because :

Note that verge is not slang but the formal/medical name of it.

You're overthinking it. All foreign movies dubbed in French have different translations for spoken dialogues and subtitles. It's never the same persons doing these translations. Often, the French subtitles are the same in all French speaking countries but the spoken dialogues are different between French Canadian and French "Parisian". They've never thought of making something consistent. It's often difficult, for instance, to translate jokes.

Not the answer you're looking for? Browse other questions tagged traduction anglais latin cinéma or ask your own question.