According to Larousse, "entremets" is "plat sucré, chaud ou froid, que l'on sert entre le fromage et les fruits ou comme dessert." and "dessert" is "dernière partie d'un repas" or "mets sucrés qui le composent". I cannot see a difference between both definitions when they mean a sweet plate served after the main course. Is there any?

There are several differences.

Entremets literally means "between courses" while dessert etymologically means what is eaten during the desserte, the end of meal service. Consequently, an entremets wasn't a dessert (or at least not the dessert), being necessarily followed by some other dish.

Nowadays, the number of courses served in an average meal (typically 3 or 4 like entrée1, plat, fromage, dessert) is quite reduced compared to what it used to be in the past in the upper class society.

The usage of eating entremets has dropped too but many delicacies that used to be served as entremets, especially the sweet ones, have kept this generic name and are logically served now as desserts. They are essentially small and often soft individual dishes, like crèmes, mousses, flans and the likes while bigger pastries like a tarte, a buche and other things that are cut in parts or slices are not called entremets. Raw fruits and plateau de fromage are not considered entremets either.

Finally, there is a wide difference in usage, dessert is commonly used while entremets is rarer and more expected to be used in a gastronomie context.

Google Ngram shows a significant difference in written documents. I suspect it would be even wider if done from an oral French corpus. 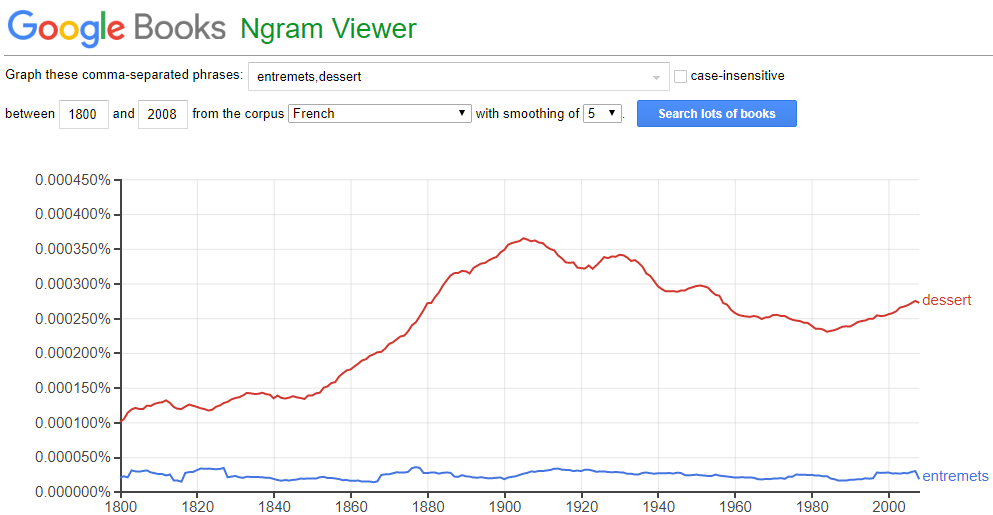 1 Beware that the English entrée is a false friend, its French meaning being starter.

Not the answer you're looking for? Browse other questions tagged vocabulaire synonymes alimentation or ask your own question.

9
When was the word “ambigu” first used with the sense of “meal with all items served at the same time”?