As a native English speaker, I hear and speak the 'o' in the French 'Sciences Politique' and 'Sciences Po' very differently.

I am always a little confused by the abbreviation 'Sciences Po' because I would never imagine that that is a natural choice (also in English the corresponding natural abbreviation is different: 'Poli Sci').

So in standard French pronunciation, are the two 'o's different or the same? (if possible IPA would help me)

And, the intent of this question, if the two 'o's are distinct, is it still a natural sound change when the abbreviation occurs or do you pronounce any word final 'o' that way? (or both)

On forvo, 'po' sounds different from 'politique', but maybe that's my English ears.

In many accents of French, the letter "o" has two pronunciations that can be written in IPA as [o] and [ɔ]. Neither vowel is the same as the vowel in the French word la, which is transcribed in IPA as [a].

Neither vowel is the same as English "toe" either. The English word "toe" tends to be pronounced as a diphthong (or gliding vowel) that ends with a sound like a "w" or short "oo" sound, while French vowels in most accents are monophthongs i.e. they do not change from start to finish and don't have a final glide. But I think that English "toe" is a better approximation for both vowels than English "pah".

I would say that making a distinction between [o] and [ɔ] is not as important for a learner as making a distinction between [ɔ] and [a], because the distinction between [o] and [ɔ] is not consistent across all accents of French: different accents use one or the other sound in the same position. Most accents use [ɔ] in words spelled with "o" followed by -mme, -nne or -tte, such as homme, bonne, grotte. Some accents in the south of France have no contrast between the sounds: in such an accent, the use of [o] vs [ɔ] is based entirely on the surrounding sounds. Even in accents where [o] and [ɔ] can contrast, the use of [o] vs [ɔ] is often predictable based on the context.

One context where the distinction may be neutralized is in word-final position (at the end of a word with no following consonant sound). Accents from both the north and south of France often only use [o] and never [ɔ] in word-final position. In an accent like that, Po could only be pronounced [po]. But in an accent that allows [ɔ] at the end of a word (for example, in Belgian French or Swiss French), Po might be pronounced [pɔ].

Depending on the accent of the speaker, the two ways can sound really different. I live in a region where we emphasize a lot our vowels, and the o's in Science Po and Politique are definitely pronounced in different ways.

Info and Information do have the same specificity with their o.

The major rule is every o that is at the end of the word or before a [z] is pronounced [o] (poser, marteau). You pronounce [ɔ] when the o is before a double consonant, or before an l or an r. (sol, somme).

Here is a transcription which, I think, corresponds to the real pronunciation. Try it at high and low speeds. 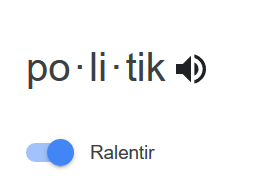 As user Laurent S. says, the pronunciations heard in the two samples proposed in the body of the question do not vary appreciably from one another; it is the pronunciation that seems to be invariably heard. I identify my pronunciation of this o as essentially the same.

You say you tend to prefer the o of the English "politics", which I suppose must be the RP short o of words like the following.

The vowel used in French is not that one, nor that of a in "la", which is one of the so called cardinal vowels; you find it at the left bottom corner in the chart below. 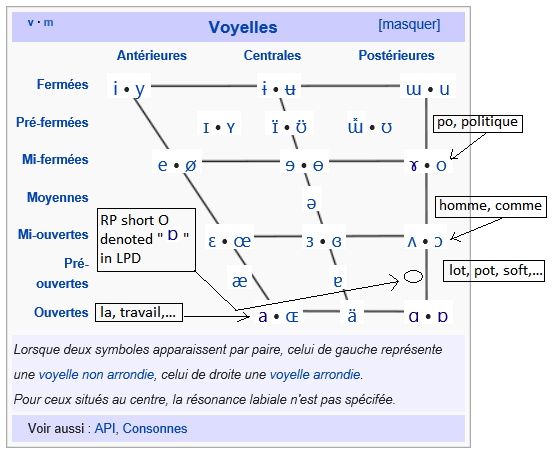 Table from the Free Encyclopedia: Voyelles cardinales (with added notes)

This is the pronunciation for the following words in French.

Instead of these two vowels, the vowel we hear in the proposed samples is again a cardinal vowel, but a half-closed back rounded vowel (pronounced in the back of the mouth, the tongue being two thirds of the way up) (https://fr.wikipedia.org/wiki/Voyelle_mi-ferm%C3%A9e_post%C3%A9rieure_arrondie). It is found on the right of the third level from the bottom in the chart (shown above). This is the vowel you can hear in "aucune".

However, if we look up the TLFi's pronunciation we find the transcription "[pɔlitik]"; the same result is obtained from the Wiktionary. Therefore the phonetic vowel now used is the one you find in "homme" ([ɔm][òm]) and "comme" ([kɔm][kòm]). If you listen to the pronunciations collected in the Wiktionary (homme), which I find correct, you are bound to notice a difference from the pronunciation collected by the same source for "politique". This shows that the symbol "ɔ" does not correspond to the sound in "politique", at least that which seems to prevail. An allophonic variant slightly more open and tending therefore towards [ɔ] might be used, but it can't be as open as to become "ɔ".

Nevertheless, this type of extreme variation is possible in other words. For instance "pôle", "rose" (and other such words) have the standard pronunciation [po(:)l],[ro(:)z] respectively, but in the South of the country some people might still pronounce [pɔl] and [rɔz]. compare the first two pronunciations here, as they are characteristic of the great difference there can exist in the pronunciation of a given word.

I'll say that the "po" of "sciences politiques" and "sciences po" sounds the same in french [pɔ]. Maybe you think that it's sound differently because in "sciences po" you finish your word on an "o" sound, so you may perceive the pronunciation of this o as if it were emphasized.

10
Do I have to learn /o/ or /ɔ/ separately?
3
Pronunciation of “au” in restaurant
1
Differences in pronunciation in dictionaries