Is there a distinction between "le rêve" and "le songe"?

Question: Are the words "le rêve" and "le songe" completely interchangeable, or is there a distinction between the two? In expressions such as "Je songeais qu'on pourrait aller au théâtre" it seems best translated as "I was thinking we could go to the theatre," indicating just a thought, not a dream.

For many centuries, songe used to be the only word to mean "dream" in French. It cames from the Latin somnium which relates to somnus (sommeil, sleep).

On the other hand, rêve was created from the verb resver that meant to wander, ramble or prowl. Resver etymology is not firmly established, there are competing theories.

Anyway, rêve had for a long time the negative connotation inherited from resver while songe was the neutral and positive word for dream.

Rêve lost its negative side and became more popular than songe in the nineteenth century. 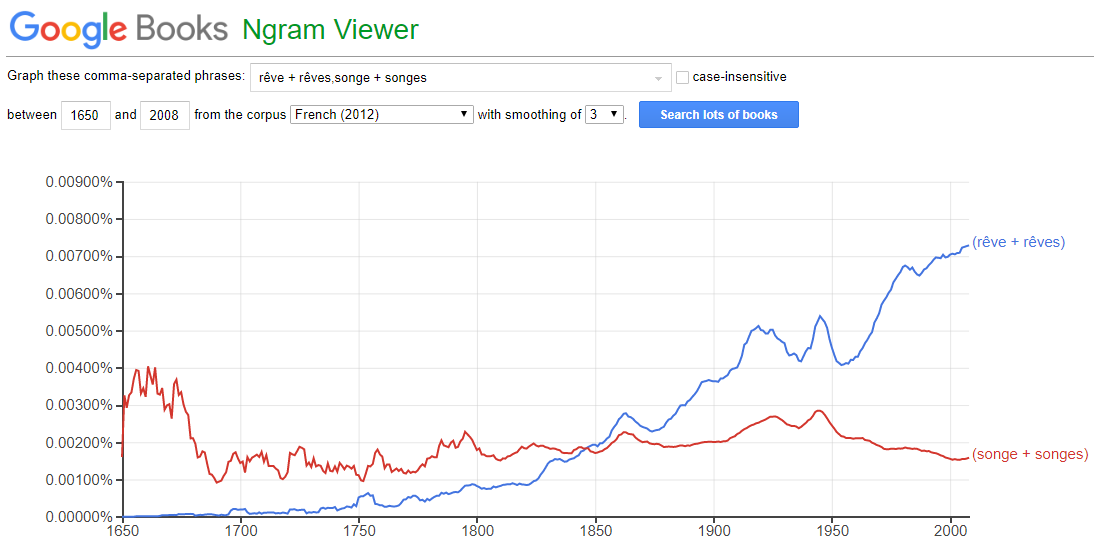 Nowadays, the substantive songe is almost never used in casual French so un rêve and un songe are definitely not interchangeable unless a poetic/literary effect is expected.

The verb songer, while rare, is still used but has shifted its meaning from rêver to penser with a small nuance. Penser means to think (of something) while songer is more like to imagine the eventuality of something, to consider something. Compare:

Je pense me présenter aux élections. : Odds are high it will happen.

Je pense à me présenter aux élections. : I do not forget to do it.

We can see that in the songer case, there is still a part of dream in the sense imaginary images or events are showing up in your mind.

The word "songe" is essentially the literary word for "rêve" and it is not used much in everyday language to say "dream".
In a less important way it's a word that is used with the meaning of "daydereaming" (TLFi C., "Rêverie à laquelle on se laisse aller à l'état de veille, construction de l'imagination") and then it is usable in everyday language, but few people will use it, only the more literary minded will and at that rather in the particular context of lofty enough thougts, and instead people will have recourse to non neutral terms such as the rather pejorative "rêvasserie" (however, the verb "rêvasser" is more common (ref.); the particular meaning of "rêvasserie" TLFi, B. corresponds to the following meaning of "rêvasser": "(TLFi, Laisser la pensée, l'imagination se perdre en des rêveries vagues, changeantes et souvent chimériques. Synon. rêver (v. ce mot I B)".

There does not exist a substantive with the root of "songer" and a corresponding meaning when "songer" means, as you say, "thinking". The meaning is that of TLFi, II.B.1.a), "penser réfléchir".
To be perfectly correct, it is not absolutely true that there does not exist a corresponding substantive ; there is one, "songement", and we find it under the pen of a certain Barbusse (TLFi, Rem.: "Songement, subst. masc.,rare. Fait de songer, rêverie. Te v'là en songement, toi, camarade, qu'est-ce que tu songes? (Barbusse,Feu, 1916, p. 106)"). The writer is therefore entirely free to adhere to this coining, it is up to the reader to find out what the word means; of course, the writer must not mind the eventuality that this usage might make them appear somewhat odd, unconventional.

The preceding answers give a good point of view of the distinction between "rêve" and "songe" in literature.

But more precisely, on a psychological point of view, there is a real distinction between "rêve" and "songe" in modern French:

"rêve" means a dream made during your sleep: everybody dreams every night, though we don't always remember our dreams.

"songe" means something different: a "songe" is a dream made while you don't sleep, that's why we talk about "l'air songeur", having the same meaning as "l' air absent": your body is there, but it seems your mind is somewhere else: in that sense, we use "songe" for "rêverie", which is a kind of false dream, that you construct intellectually after your desire. This is the light sense of "songe".

But the real "songe" is exactly like a dream: you mentally see images and hear dialogues that show a story and totally captivate your attention, as strongly as in a dream at night, but though you're awake you don't chose what you see, it comes by itself, independently of your will, just as if you were watching a movie. In fact, real "songes" are quite rare, and most people don't have a single one in their whole life.

As an addendum, my former French professor (Henri Godard) recently sent me an email to add another dimension to the current use of “songer”. He writes:

I take this to mean something like, for example, what a Democrat might say after a friend displayed a “Make America Great Again” bumper sticker on his car. “À quoi tu songeais??” What were you thinking??