Captain's log, supplemental. We remain like a fly in amber trapped in the void. We have encountered a vessel which appears to be the USS Yamato. All its systems are shown as functioning, yet it seems devoid of life. Commander Riker is leading an away team - hopefully the answer lies over there. 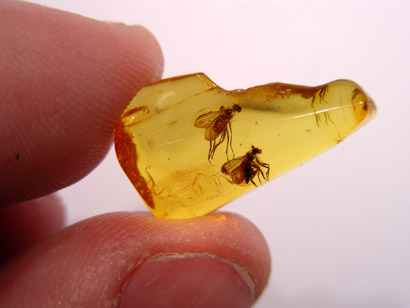 I suppose that "like a fly in amber" is a current expression meaning that the fly is trapped in a place where it should not be.

If my supposition is correct, then the equivalent French expression is "comme une mouche dans le lait": so, in French, amber is replaced by milk.

And for the case where it would strictly be "indicative of a bygone era that still exists in the present", then in French, the sentence "We remain like a fly in amber trapped in the void" would be translated "nous étions comme fossilisés dans le vide", because in that case there is no typical expression to replace "a fly in amber", but the verb "fossiliser" gives the same idea.

A fly stuck in amber means being stuck in time... Amber preserves an insect's body as it was at that very moment that it got stuck, so death does not decay it even tho thousands of years may pass.

So when Captain Picard says that the USS Yamato is like a fly stuck in amber, he saying that: it is like Captain Picard's crew who discovered the USS Yamato has stepped back in time and everything on the Yamato is exactly like it was in the x number of years since the vessel was last heard of. Nothing has decayed or gone bad.

If it would be possible to have gotten a dinosaur stuck in amber we would have seen it's eyes, skin, hair, etc... Unfortunately, amber is from the sap of a pine tree, so the only thing getting stuck in amber were insects. Sigh. ;)