Wiktionary contains many IPA transcriptions, like, say /œf/ in the page for oeuf

I am just wondering how reliable that is. Is there a better source? Is there a standard reference?

I find that sometimes the IPA transcription clearly disagrees with what I hear on, say https://www.forvo.com/

(I already found the related question Lack of phonetic transcriptions in French & Audio Dictionaries with Prononciations, but I mean to ask about reliability. Is wiktionary reliable? Are there better online resources?)

I think that the French Wiktionary is a good source of IPA transcriptions.

For many words it has a prononciation section which gives the IPA transcriptions across different french dialects (e.g. the word prononciation), besides the corresponding audio file that allows you to hear that pronunciation.

A side remark which is probably relevant for whoever is interested in the French IPA, is this page of the Wiktionnaire on French pronunciation. One interesting piece of information you can read there (followed by some informative tables):

Let me conclude with another side remark. Whenever you find that some IPA transcriptions in the Wiktionnaire do not correspond to what you find on other sources, you are encouraged to click on the corresponding discussion page and point it out: 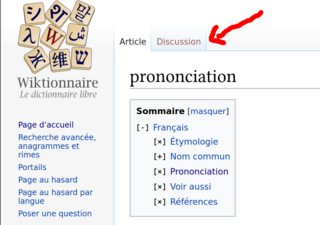 Even if the Wiktionnaire is not yet perfect, it constantly improves thanks to this kind of feedback (so this remark, seemingly off-topic, contributes to providing the best source for IPA transcriptions!).

It depends on what your purpose for using the transcriptions is. I don't know of a source that systematically lists narrow phonetic transcriptions for French words, so with any source I know of, there are going to be some things that you can notice from audio that aren't transcribed because they aren't phonemic (e.g. you might hear some speakers devoice the end of the final vowel in ami, pronouncing it something like [amiç], but I don't know of any source that lists that as a possible pronunciation rather than just giving the phonemic transcription /ami/).

The English Wiktionary (the one with definitions in English, which you linked to) is not my first source for French pronunciations. As Maroon mentioned, the TLFi has pronunciation information and is freely available online at the CNRTL website (example: https://www.cnrtl.fr/definition/bien). The TLFi entries have a pronunciation section at the bottom with IPA, and the CNRTL also has a "Morphologie" tab that gives pronunciations from ATILF (Analyse et Traitement Informatique de la Langue Française) in a transcription similar to IPA (I think it's SAMPA or a variant?).

The pronunciations shown on the CNRTL do tend to be conservative, so if you're dealing with a word where you suspect the typical pronunciation has changed in recent years, they might not meet your needs very well. But I tend to go with them unless I have a particular reason not to. As Maroon mentioned, sometimes there are apparent errors or unusual pronunciations; for example, I am doubtful of the entry for grosses, which says it is pronounced /grɔs(ə)/ in contrast to the singular grosse /gros(ə)/. That entry also is an example of how the CNRTL transcribes schwa in many places where it would not be pronounced in normal speech in a typical Parisian accent.

One thing to keep in mind is that it's not that rare for English Wiktionary entries to have pronunciations that are automatically generated from the spelling of a word. That works most of the time because French words tend to follow spelling-to-sound rules, and editors are supposed to manually enter pronunciations for exceptional words. However, sometimes the creator of an entry forgets to do that or doesn't know about the irregular pronunciation, so this means that Wiktionary sometimes is missing unpredictable information about the pronunciations of words with rare spelling patterns, or with phonemes that tend not to be distinguished in a straightforward manner by the French spelling system (e.g. /e/ and /ɛ/, or /œ/ and /ø/).

I don't have experience using the French Wiktionary, so I can't comment on it as a resource.

18
Lack of phonetic transcriptions in French & Audio Dictionaries with Pronunciations

18
Lack of phonetic transcriptions in French & Audio Dictionaries with Pronunciations
16
Words ending on i/u, spoken with (IPA) [ɪç] – is there a system?
2
« Y s'jett'nt su' la porte en hurlant » : transcription du parler populaire ?
3
Aspiration in words beginning with h
5
Dictionnaire français vers français avec IPA
2
When there is a /dl/ or /tl/ in the transcription, do you pronounce the /d/ or /t/ sound?
0
IPA spelling of 'possible' in French seems to be in conflict with how its pronounced
4
Informal words for tv set? Informal agreement?
1
What is the rule for the different pronunciations of "emm" and "enn" in French words?