Difference in “ai” sound in “aime” and “aimer”

What is the reason why "aimer" deviates from the general rule that "ai" makes the /ɛ/ sound? Are there other examples of this?

I have seen elsewhere about how the pronunciation of "ai" becomes /e/ at the end of verbs (e.g., here and here), but that even this varies from region to region; for instance the video above suggests "j'ai" is /jɛ/ at 2:00, but the pages I just linked say it should be /je/ because it is a verb ending with "ai." And I have seen elsewhere on the internet where some speakers pronounce "j'aurai" and "j'aurais" differently, while others do not.

But my question above seems unrelated since the "ai" in "aimer" is not at the end of the verb.

French has typographic rules and orthographic rules but when talking about pronunciation, you'd rather talk about usages, not rules.

These usages vary depending on several factors and make what is called an accent. Accents are acquired at very early stages of language learning. Kids have usually the same accent as the people surrounding them (family, schoolmates) and then their accent evolves with time, being more or less affected by the surrounding accents. This is not specific to French, all languages spoken in a large enough territory present the same kind of geographical and chronological variations.

That said, some phonemes are identical or almost identical whoever native French people use them while other phonemes present variants. Many vowels are in the second category.

A second thing you need to know about French is the fact it is not written phonetically. The way a word is written only gives hints about how it is pronounced, actual usage might be different to what would be expected. English is worse than French on that subject.

In aime, ai is almost always pronounced /ε/ in France.
In aimer, the /e/ pronunciation is the most common in Southern France but competes with /ε/ elsewhere.

This ai is often pronounced the same way as the et of poulet. Here is a map from Mathieu Avanzi showing this kind of regional variations, it might not exactly match the aimer figures but is nevertheless an example of such patterns : 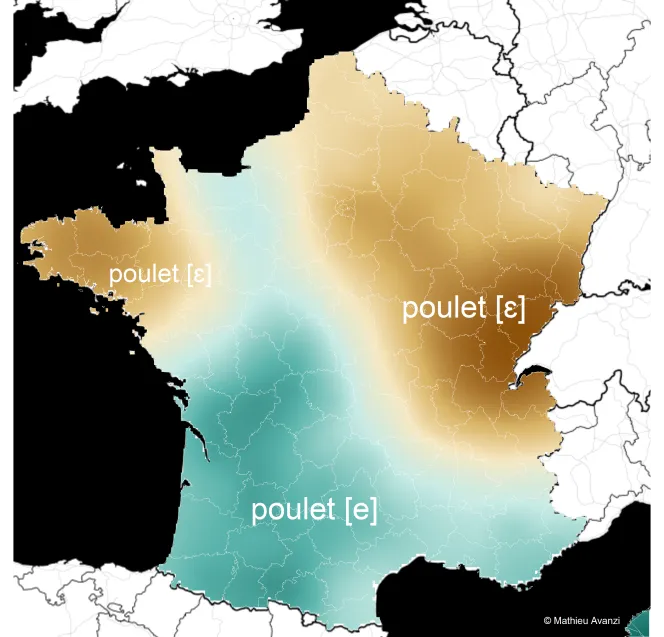 As you are not a native French speaker, you shouldn't really care about which of the common pronunciations to choose when pronouncing aimer.

The primary goal of oral communication is to be understood, either of these vowels is fine.

In some regions, this is regularly so for verbs of similar construction, not only for "ai" but also for "é", and "ei" (when pronounced as é).

/e/ and /ɛ/ depending on the region

Notice that the change in pronunciation is indicated by the accent in the case of "régner".

Not the answer you're looking for? Browse other questions tagged prononciation or ask your own question.

15
When to put an accent on the letter E
7
Cliticization of “je” in spoken French: which syllable gets the /ʒ/ sound?
5
When can I drop a mute e between two pronounced consonants?
0
Is the pronunciation of “tu” “toosh?”
2
Is the list of words that get elided a closed set?
3
Rules for voicing differences between written and spoken consonants
0
What is the rule of concatenating words on a series of words that start/end with vowel?
6
Why is the 'e' sometimes pronounced at the end of words?
7
How are defunct spellings pronounced when read aloud?
0
Is there a way to be notified if there is an irregular pronunciation?