How do bungs semantically relate to eyes?

I'm assuming Etymonline signifies "A stopper for closing a hole in a container" for bung. But I can't think of any semantic relationship between bungs and eyes! Their functions and purposes differ. Bungs can be easily removed, but human eyes aren't supposed to be. Undeniably, eyes aren't designed to close holes! 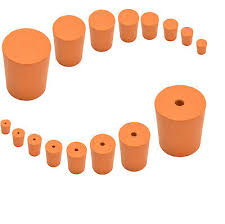 "amount by which a cask or bottle falls short of being full," late 15c., from Anglo-French ulliage (early 14c.), Anglo-Latin oliagium (late 13c.), Old French ouillage, from ouiller "to fill up (a barrel) to the bung," literally "to fill to the eye," from ueil "eye" (perhaps used colloquially for "bung"), from Latin oculus (from PIE root *okw- "to see").

Browse other questions tagged étymologie or ask your own question.