What's the difference between Espanol and Espagnol?

If you enter the word "Spanish" into Google Translate when translating English to French, you get "Espanol". However all other references to Spanish have "Espagnol" (with a 'g').

What I want is simply the word "Spanish" (a menu choice) where I'm referring to the language but I don't want the word "Language" in there.

What is correct here?

The language is espagnol in French, as is the adjective.

Espagnol with a capital E is a noun: Spaniard.

Do not blindly trust on-line tools.
Do not use Google Translate for something it is not designed for.

Here is the final reply I got from Google Translate support regarding this issue:

By design, Google Translate's goal is to enhance communication of commonly spoken languages among people. i.e. to translate a conversation or a text; It is neither designed to serve as a dictionary nor to translate a single word - though it does do this task with a certain level of inaccuracy; 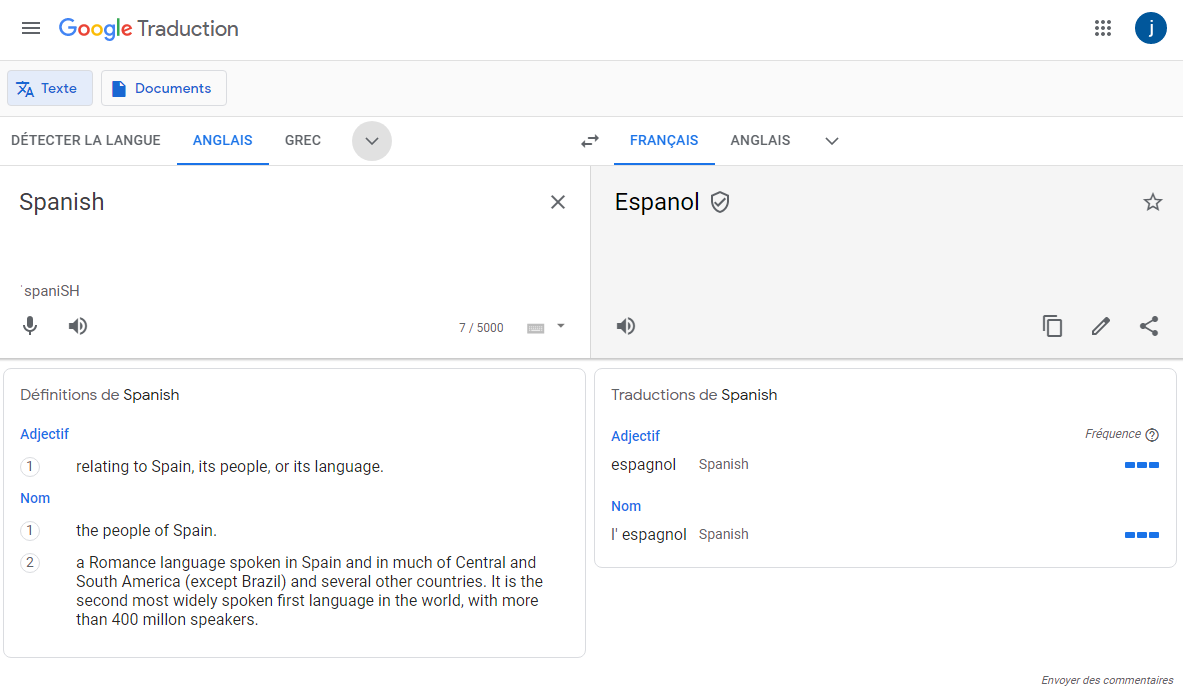 The checkmark right of "Espanol" means someone validated this translation1 but in doubt, double check. It would have been easy to discover that Espanol doesn't appear in any French dictionary and very rarely in French texts, where it is either from a Spanish text incorrectly detected as French, or an incomplete transcription of the Spanish Español due to the fact the character "ñ" is difficult (sometimes even impossible) to type with a French keyboard, or the tilde has been dropped by the OCR program.

I reported that one to Google:
https://support.google.com/translate/thread/5480623/how-to-inform-google-about-wrong-translated-word?hl=en

As I suspected, it is not simple to have this mistranslation corrected.

Unlike in English, language names aren't capitalized in French, but in a menu choice where this word appears alone, you can use an uppercase E for consistency or just because a choice can be considered a single word sentence.

1 Actually, it might have been validated by an algorithm.

The word "Espanol" does not exist in French. In your example, langue is feminine, so we write the adjective in feminine form :

But for mentioning the language alone, we say "espagnol" (without "e" at the end).

By the way, the word for spanish people is the same, but with a capital at the beginning :

If you are referring to the language then you should write « espagnol » when you are writing in French and « español » if you mean to write in Spanish. As opposed to English, language names are not always capitalized.

Usually, for menu options, the name of the language is written in the language itself so that the local speaker will recognize the words. Usually, menu options are capitalized too. This gives you something like this (from MacOS preferences): 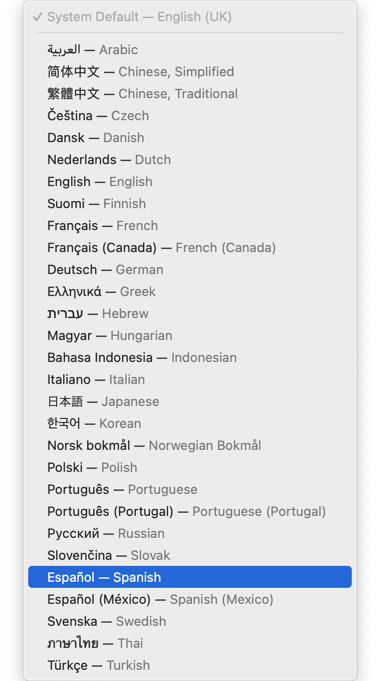 Note that « espanol » is neither a French nor a Spanish word.

2
I am a little bit confused due to the difference between dictionaries on the verb "ficher". Can native speakers take a look?

22
What's the difference between “notre” and “nos”?
11
What is the most common polite informal way to refer to a woman or man in French? (e.g. guy or girl in English)
1
Are "de + adjective" and the "que de + adjective" essentially the same construction?
0
What ways are there of creating adjectives / adjective-clauses in French?
1
How can I find the meaning of an adjective that comes before the noun?
3
Position of the adjective in complex sentences
1
What is the meaning and grammatical function of "tout" in "se faire tout un film"?
4
Translation of "I have not spoken {language}...."
2
Confusion around using "des" in sentences
3
What is the woman saying in the song 'L'Amour' by LiQWYD?