Is there a difference between these sounds or are they in fact the same? If they are the same, why are they considered distinct on websites dealing with French phonology?

Like many native French speakers, I pronounce the vowels of le, peu and veux identically. The difference is that the former is caduc (might be skipped depending on the context) while the other ones aren't.

As XouDo reply shows, not everybody share the same opinion about the pronunciation of these vowels so you shoulnd't care too much about how you pronounce them. There are not a lot of minimal pairs (words with a pronunciation expected to differ only by these vowels) and even in that case, this is not followed by everyone. For example I do not make a difference when saying jeûne and jeune, both are /ʒœn/ in my mouth while people in the Arpitan area might say /ʒø:n/ for both.

On the other hand, I pronounce the vowel present in sœur and serait a different way.

Here is an interesting excerpt from A Diachronic Analysis of Schwa in French Joshua, by M. Griffiths, 2012

The most troublesome issue posed by schwa for learners of contemporary French is the merger that schwa is currently undergoing with |Œ|, the archiphoneme of mid-front rounded vowels containing the phonemes /œ/ and /ø/, meaning that the three expressions, Je ne vois (I don’t see), Jeune voix (Young voice), and Genevois (a former French province) could all have the same pronunciation of /ʒənəvwa/. (Walker, 1993). This merger arises from the articulation of the French schwa. It is traditionally more rounded and slightly more fronted than the IPA schwa (Fougeron, Gendrot & Bürki, 2007). Because of this merger, specialists of the sound system of French are currently asking if schwa can be identified as either the open-mid front rounded vowel [œ] or the close-mid front rounded vowel [ø] or if it is still, in fact, its own independent phoneme. The only difference found between schwa and |Œ| is that schwa has a shorter duration than the vowels included in the archiphoneme (Fougeron, Gendrot & Bürki, 2007). Because of this merger, the initially understood phonologic constraints on schwa are now being changed to conform with those of |Œ| leading to phonologic patterns that are difficult for linguists to understand and observe, meaning that the aforementioned environments from Walker (1993) are no longer valid.

Also a map from Matthieu Avanzi: 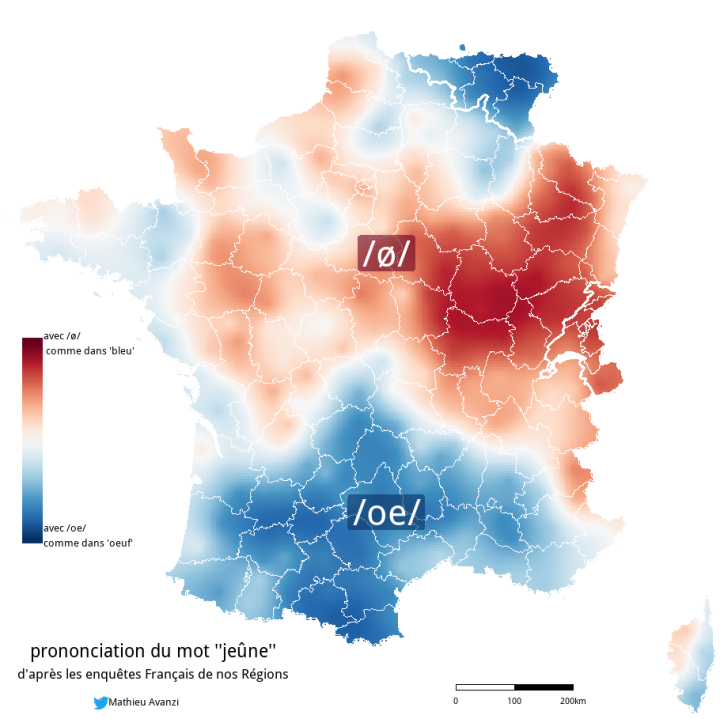 My prononciation mostly follows the phonetic classification, but not completely. There is some context-based or free variation. The “schwa” sound /ə/ tends to drift to a realization of [œ] or even [ø] when it's emphasized. /ə/ can drift to [œ] when followed by another [œ] (“le cœur”: [lə.kœʁ] or [lœ.kœʁ]). On the other hand, “le deux” remains [lə.dø], I wouldn't pronounce the two vowels identically. /œ/ can drift to a realization of [ø] when followed by another [ø], for example heureux is in theory /œ.ʁø/ but I (and I think most French speakers) often pronounce it [ø.ʁø]. On the other hand, in “heure creuse” [œʁ.kʁøz], I don't think I'd ever pronounce the two vowels identically: the consonants in between are too complex for the proximity of the vowels to matter. And likewise, “deux cœurs” remains [dø.kœʁ]: the influence doesn't work in this direction. I think /ø/ is stable: it's always realized as [ø].

Not all French speakers pronounce in the same ways, as shown by examples in this thread.

The standard analysis of French phonology is based on a kind of “middle ground” pronunciation which is roughly an early 20th century urban pronunciation from the Loire valley (i.e. south of the North of France). This analysis results in 16 vowels (/ɑ/, /a/, /ø/, /œ/, /ə/, /e/, /ɛ/, /i/, /o/, /ɔ/, /u/, /y/, /ɑ̃/, /ɔ̃/, /ɛ̃/, /œ̃/). Most French speakers don't distinguish those 16 vowels (I think 13 or 14 is common), but which ones don't exist as distinct phonemes depends on the speaker, mostly based on regional variations. For example, /ɛ̃/ and /œ̃/ (brin/brun) are mostly indistinguishable in the north of France but distinct sounds in the south. On the other hand, in most of the south of France, /ə/ and /ø/ are not distinct phonemes. Conversely, there are vowels that don't fit in this analysis, such as /ɛː/, which is typically a distinct phoneme from /ɛ/ (fête/faites) in Québec French but typically not France.

Not the answer you're looking for? Browse other questions tagged prononciation voyelles or ask your own question.