Normally it seems that words beginning with H that are borrowed into French from another language are masculine and have an h aspiré: le hockey, le haïku, le hamster.

In Quebec, at least, Halloween is different - it seems to be feminine with an h muet, at least if you look at the search results at Le Devior or Radio-Canada. Quebec's office of the French language (OQLF) has declared that Halloween is indeed feminine and has an h muet.

On the other hand, at Lawless French, Halloween is on the big list of words with an h aspiré, and there's a transcript of a monologue by a native speaker from France who uses "de Halloween" and "d'Halloween" within the same paragraph!

Finally, Google returns about three times as many results for "Joyeux Halloween" as it does for "Joyeuse Halloween", implying that the masculine version is more popular.

Outside of the OQLF, is there a consensus on the gender and, um, "muet-ness" of this word?

Loanwords won't necessarily take the masculine gender, it might depend on the word ending or its morphological or semantical similarity with its French counterpart.

In any case, usage decides what gender will end up in the dictionary entry. And this entry is more likely to change to reflect what native speakers think than those speakers are likely to comply with the prescriptions from a dictionary. Moreover, usage sometimes varies between Québec and European French, and between prescriptive usage and casual use. For instance, a well known and recent example is covid, a feminine word in Québec because of d(isease) associated to (la) maladie, while in France, despite the "official" feminine gender, speakers overwhelmingly use le covid because it is associated with le (corona)virus. Endless discussions about one gender or another being "correct" are pointless, as is discussing le sexe des anges.

The gender of Halloween doesn't matter that much because whether you use the masculine or feminine wouldn't prevent the word from being understood. I guess the feminine can be explained by an implicit fête: Souhaiter une bonne fête d'Halloween → Souhaiter une bonne Halloween or because the word ending sounds like -ine which is a feminine one in French. I would nevertheless always say Un bon Halloween if I had to.

As for whether the H should be aspiré or not, my feeling is the liaison is always done in France, so the word breaks the rule stating non Latin words should have an H aspiré.

To contrast with Dimitris' answer, as a native French speaker (from France), "une Halloween" feels weird.

It's pretty rare to say "un/une Halloween" or to use adjectives with it, so few people will have a strong opinion about it, but it seems that the masculine is predominant in France, while the feminine is used more in Quebec.

Here's some results in google news for "une halloween": 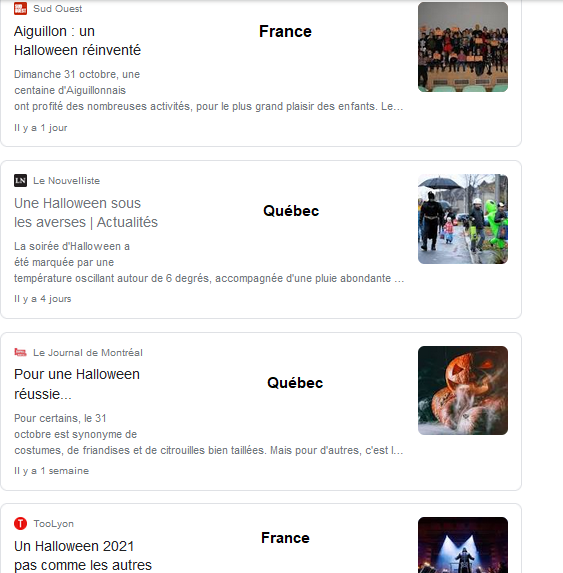 Other examples in official French translations:

It seems that when big companies need an official French translation, they go for a masculine Halloween.

On "muet-ness", I'd say the h muet is strongly predominant. You'll find many mentions of "soirée d'Halloween" or "fête d'Halloween", and The jack-o'-lantern is called "citrouille d'Halloween", I've never seen "de Halloween".

14
Gender of non-specific antecedent
9
Understanding gender and article use disparities in country names
1
Dictionary with search by endings
2
Beyond memorisation and time, how can you master grammatical gender in French?
2
Gender for pronoun “personne”
1
word gender - why masculine or feminine?
1
Gender: de + adjective
2
Gender and number agreement with past participle
2
Gender of pronouns and question words – when to use what?
1
Gender neutrality in French adjectives