What is "gran" in French?

These examples of usage of gran in French were shown by translate.google.com (after clicking the icon in lower right corner of the left text field):

This very much resembles Spanish. But in French it is very strange because you normaly use grand or grande. I have not found it in any dictionary. Or is it some special form of grand?

EDIT: how it did look like in google translate: 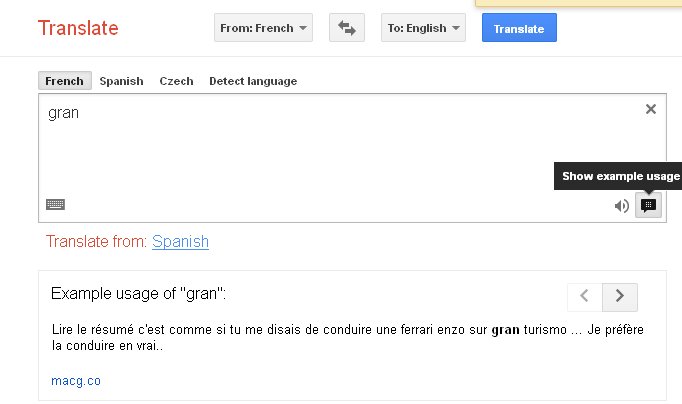 When Google Translate does not know a word, it leaves it unchanged. Even worse, sometimes it outputs an English word, because the translation goes through the English language. (I saw it the other day but it has been fixed.)

About the examples you listed:

More generally, Google can find examples even with words that don't exist, like "radiohead" or "satelite" (one L missing).

In deed, "gran" is an Italian adjective (in short form) which translates into "grand" or "grande" (French) or "great" / "grand" (English). It comes from the Latin "grandis" through the old english "graunt".

It doesn't exist in French so Google translation didn't translate it....

Gran Turismo is a proper name, but it is Italian. In French the equivalent class (GT) is also called Grand Tourisme.

"gran sport" is a proper name and probably meant to be italian (like the Ford Gran Torino).

I have no proof of it, but I am under the impression that the adjective you mention may derive from the usage there is for it in Italian.

Actually, the adjective "grande" can be shortened to just "gran" when used in connection with masculine terms. For example, you could say Egli fece un grande/gran rumore aprendo la porta (He made a lot of noise while opening the door), but the preference would be for the second option, and surely nobody would ever say grande ciambellano instead of gran ciambellano or grande visir when talking of the relevant positions at court.

I know it is not relevant to French, but perhaps this could explain the usage of gran in some expressions.