Why does French use a "split negative"?

In Spanish, the negative precedes the verb:

In Anglo-Saxon languages, the negative follows the (helping) verb:

So do the two different parts of the French negative perform different functions in the negation?

And what about the times when it seems like ne is superfluous? As in "Pas du tout ".

There are 16 pages describing the way to negate a verb in my edition of le bon usage, plus 6 describing the ne explétif where ne isn't used to negate. I played with the idea of summarizing them, but dropped it.

In the oldest time, you could have the "strong" form non, hence nonobstant, nonchalant, non-recevoir... But the most common form of the negation was in fact ne alone. Eventually emphatic elements were added, which varied depending on context: Je ne mange mie ("I don't eat a crumb"), je ne vois goutte ("I can't see a drop [of water]"), je n'avance pas ("I don't move a step"), je ne dis mot ("I don't speak a word").... most of those are still considered valid literary usage.

Eventually the "auxiliary" (as Grevisse calls them) to the negation became obligatory in many contexts. Grevisse (Le Bon usage., 14e ed., §§1012-1019) does not explain exactly why pas evolved from being used with verbs of movement to become the most common of these auxiliaries, then the default one. The TLFi (Trésor de la Langue Française informatisé), however, notes that the usage dates right back from the 12th century, so although it was not the standard of negation at the time, it is a feature of French almost from its birth.

Some dialects have gone in different directions and have other adverbs as the default auxiliary. If you want to get into the real nitty-gritty, you'll probably need to look at more technical literature like the bibliography in the TLFi's entry

(Copying parts of another answer of mine.)

In addition, linking ne to the verb allows you to negate verbs in a way that can be quite tricky in English. For example:

The origin of the "auxilliaire de négation pas" is not clear. I still found a page in Google Cache for Finnish student learning french. It also seems to be kind of confirmed by the Wiktionary. To be noted, the real negation is the "adverbe ne" and not the auxiliary.

[EN] The word pas was originally a simple noun which was used to reinforce the negation. It persists other noun of this type, but less frequent : ne … point (= ne … pas), used in formal language or regional usage; ne … mot, ne … goutte are literary and have been conserved in fixed expressions.

It's a manifestation of Jespersen's cycle.

But the speakers of Middle French and Middle English came to think of the negation particle as being too difficult to hear, and so augmented the negation by adding an additional word:

Originally, pas was used with movement words, and other words were used in other contexts, like mie 'crumb' and goutte 'drop'. But eventually, pas was generalized as the negative word, and became mandatory, while English dropped the original negation entirely.

The standardized varieties of French preserve this situation, while the colloquial varieties follow English down the cycle by dropping ne entirely. (Although English took a detour by requiring not to be attached to do.)

The same thing happened in all other Germanic languages, ich weiß es nicht, ik weet het niet, jeg vet ikke, and it's easy to imagine a future form of French losing ne entirely, colloquial or not. But who knows.

From a linguistic viewpoint, the negation isn't split, merely transformed immediately before final utterance. Ne is phonologically a single word, and historically a single syntactic structure, as is pas. Today ne . . . pas, while two words, is a single syntactic structure. The redundancy improves intelligibility, and the separation serves to delimit the verb or verbal. My French is passable, but I am not a native speaker, and will have to depend on parallels in English.

Two analogous structures exist in English: the progressive and the perfect. Applying each in turn to they go yields they are going and they have gone. In both cases the verb is encapsulated within a single auxiliary structure, as French verbs are encapsulated in ne . . . pas. Linguists write this as a transformation of something called a K-terminal string:

You've got to have tense, and be takes tense, and the subject is they, so it's are. The verb is go, and all verbs take ing, so it's going. The structure (have + participle) works the same way.

The foregoing may look a little brain-damaged, but it's remarkably efficient. The whole rule for auxiliary in English (neglecting passive and subjunctive, which are sentence transformations) is:

So with two tenses, past and present, and five modals--will, shall, can, may, must--you can generate a pageful of ways to link a verb with its auxiliaries, including the more recondite forms such as would have been giving. Note that this rule doesn't link the whole verbal to the subject--that's a different animal called the s-form rule, which is applied over the auxiliary.

To negate an affirmative sentence in modern English, the transformation is quite simple: apply not after the first word in the auxiliary. It goes there because the auxiliary delimits the truth of the whole sentence, both in time and condition. In the cases of simple past and present, when you haven't got an auxiliary form for not to follow, you can put it after a be, but not a verb. You have to supply a do for the not to follow. If you simply apply the Do transformation to an affirmative sentence, that will emphasize its truth value, but a do followed by a not serves merely as a sort of pre-affirmation.

I lighted upon this question at r/asklinguistics:

There is a phenomenon called the Jespersen’s Cycle, whereby the force of the negative adverb weakens over time and has to be reinforced by an additional expression, for example by saying something like “not one bit” (as in, “I did not like it one bit.”) or, as was the case in Latin, “not one step” (“nec … passum”), which over time evolved into “ne … pas” in French.

McWhorter, J. PhD Linguistics (Stanford) expounds on pp. 26-27 of The Power of Babel (2003). I post a screenshot; I don't know how to replicate its formatting with SE's tools. 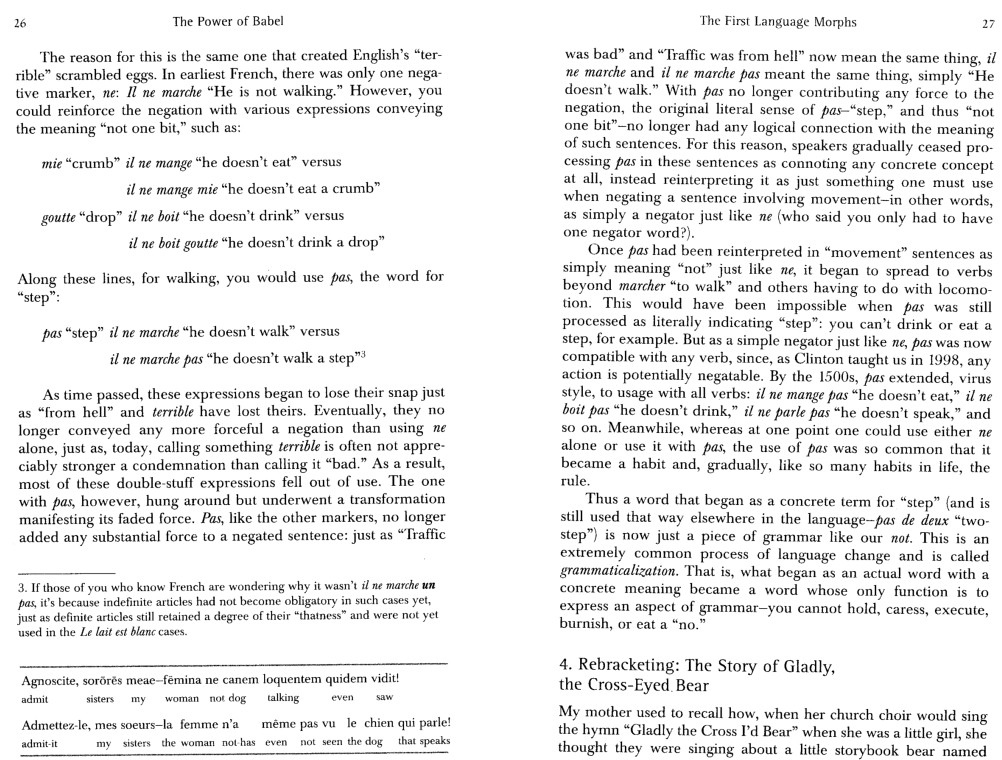 Not the answer you're looking for? Browse other questions tagged grammaire histoire négation or ask your own question.

3
Does the TV show "Maison Close" use standard French or period French?
9
Why does this sentence only use a "ne"?
3
French styles for negative statements
9
How does "plus" makes the sentence negative?
1
Why does acheter use indirect object pronouns?
2
Negative "craindre que ~~ ne [subjunctive] pas ~~"
1
Using the negative in French
2
present participle étant + "se verb" with past partciple? ("s'étant lancé")
1
Does "ne" not negate words that are already negative?