I'm trying to learn French by listening to classical music and searching for translations, and I came across a song by Jacques Brel, titled J'arrive, when he says:

I assume that the word "chrysanthème" is a flower, but does it mean anything else in French Culture so?

Chrysanthème is indeed a flower (see it here).

In France, On November 1st, there is the "Toussaint". It started off as a religious celebration but now it's more or less for everyone. To sum up, this celebration is for the Dead, and the Chrysanthème is the flower associated with it since the 19th. So while "De Chrysanthème en Chrysanthème" isn't a phrase, it still has meaning. 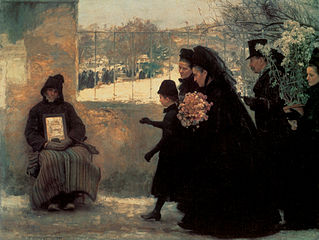 It is a figure of speech, in which the "chrysanthèmes", flowers of death, represent a burial.

This figure of speech is called a "metonymy", in which a word is replaced by another one somehow linked with it.

This is a flower equivalent to the Chysanthemum.