Excepting "savoir", how does "quoi" function as a general second negator?

Outwith je ne sais quoi and savoir, how does "ne quoi" function? Can you negate other verbs with "ne quoi"? Here are some examples.

Can misanthropes exclaim "je ne connais quoi", because they don't care about connaitre other people?

What if you're anesthetized or numb, and can't feel anything? Can you proclaim "je ne sens quoi" or "je ne ressens quoi"?

What if you're too tired to think? Can you proclaim "je ne pense quoi"?

What if you're stuffed, and can't eat or drink anymore? Can you proclaim "je ne bouffe quoi"? "Je ne picole/sirote quoi"?

The main general negator is pas, whose use in clause negation is illustrated in (1) and (5)–(8) above. In addition, the items guère, point, nullement, and aucunement may be used, particularly in more formal registers. 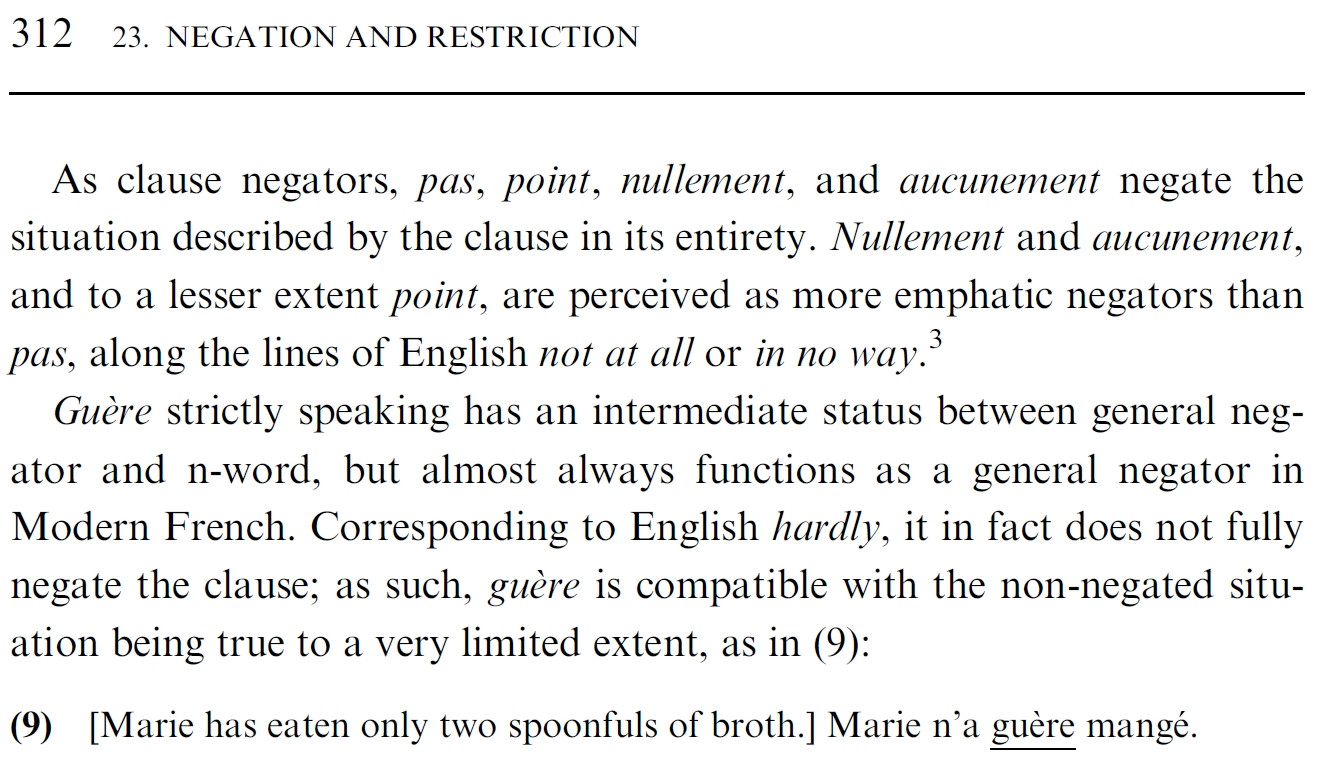 Quoi is only used as "pseudo second negator" with the verb savoir. I write "pseudo" because there is actually kind of an implicit pas in this construction, unlike the negations with guère, jamais, nullement, etc where there can't be a pas.

None of your attemps with a different verb would work.

Quoi can be used in negative statements but never as a negator:

Here quoi is a pronoun replacing something that wasn't heard or understood.

Note that your question was legitimate. While a native French "knows" what can be a co-negator and what can't, there is no obvious difference at first sight between je ne vois personne and je ne sais quoi.

In early French, the first occurences of je ne vois personne were technically built like "I don't see [a] person" and je ne sais quoi. That's only after time that personne split into two words belonging to different categories, one still a positive substantive (Une personne, someone) and another generally negative, the pronoun personne (nobody) but sometimes still positive (anyone).

Such a split never happened with quoi, so it stays a "positive" pronoun even in je ne sais quoi (I don't know what) and accepts a true co-negator like pas or plus:

With personne, pas is excluded (or at best, reverses the meaning) :

but plus is fine:

Je ne vois plus personne. (I don't see anyone anymore)

Quoi is not part of the negation, it doesn't function with ne, it can't be grammatically nor semantically compared to pas, point, nullement, guère, etc.

In the sentence je ne sais quoi dire the negation is ne...pas where pas is omitted. The answers to this question might help you go further with the omission of pas.

Quoi introduces a dependent clause, it is a pronoun, it is the direct object of the verb dire.

The use of quoi depends on what follows in the sentence.

If dire had a subject then you could not use quoi, you would use ce que:

You could also have :

Although savoir is not the only verb with which pas can be omitted in a negative sentence, I think it is the only one in the list which admits quoi (or ce que) to introduce the following dependent clause.

This page has a list of the verbs that can omit pas.