Are abbreviations like DSL (désolé), PDP (pas de problème), Cv (ça va), Mdr (mort de rire), A+ (à plus) and the like accepted when writing messages/chatting in a more relaxed context? I was told that in French Internet/Messaging Slang (1) apostrophes are never used: j’ai = jai; (2) accents are ignored; (3) o=au (4) silent letters are omitted: hier = ier, parle = parl, (5) oi sound is replaced by wa (quoi=kwa) and so on.

Chatting/messaging in this way let someone sound more native? Is such a violation of the French language accepted (within a casual context of course)? When we receive a message/mail that follows these "violation rules", should we also reply in a similar manner? If one ignores them is he or she considered snobby, stilted and no "native enough"?

Those are all a little dated, and are from the times where people used T-9 (basically typing with the 1234567890 keyboard, where each number has 3-4 letters on it).

Now, in the age of smartphones and autocorrect, it's much less frequent to see this type of slang. I'll add precision on each one of them.

(0) mdr, dsl, a+ and others are almost always written in lowercase. They're still common (except cv and pdp).

(1) That's not really true, "never used" is too strong. It's not an effort at all to use apostrophes now. I'd say they're used more often that not.

(2) That's just not true. It's hard to understand if you never use accents.

(3) Used to be true, but now it's almost only used sarcastically (or by pre-teens maybe).

(4) No, people don't really do that anymore. And I don't think I've ever seen ier or parl.

(5) I knew like 2 people who wrote it that way, and now it's considered kind of childish and annoying.

More generally, all those were tricks to type faster. Now in order to write like that you'd have to fight against the autocorrect, and you'd be slower than writing normally.

Some of them are still used, like jsuis/chuis, mtn for "maintenant", etc., but "langage SMS" as it used to be is not really a thing anymore.

And about "sounding more native", I don't recommend using them until you're entirely comfortable with them. There's nothing weird with someone writing normally (provided you're using a casual register), but it feels a lot weirder if you use slang incorrectly, and you'll instantly appear as a non-native. So until you've spent a lot of time speaking to young people, and figured it out naturally, just use correct French :)

Such slang are used a lot for younger folk near me. (Canadian French).

Using them make you look like a young adult, borderline redneck if you use too much of them.

To note, In younger folk such writing bring a problem, they have difficulty to correctly write after a long time not practicing a good French. In example one of my step brother, which is French native, text/sms a lot, but now he's around 30 year old, but got big problem to write correctly if he need to do a official letter in example.

For information there is also other that are used, like;

A example easily found on the internet to such use; 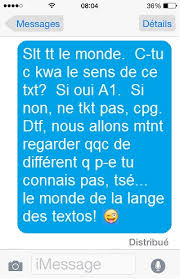 Indeed we young French people don't really use them anymore as smartphones tend to write the whole word entirely (for example typing sa at the beginning of the sentence will usually automatically give Salut).

However some of them are still widely used within the youth community, here are the ones I and my friends use the more often:

But we really avoid stuff like "c koi" or "Slt", which are as @Teleporting Goat said outdated.

Interesting. First time I heard of those abbreviations like DSL for désolé. It is much easier and faster to omit apostrophes and not use accents. I think, of course, for a French course this is not allowed. Every French course should have exact grammar. That is what grammar is for (it is supposed to be exact to every letter).

Not the answer you're looking for? Browse other questions tagged argot abréviations correspondance internet or ask your own question.

17
French slang equivalent of "chicken"
11
Abbreviation of "Instant messaging"
2
IM slang expressions in textmessages
1
A French sentence with slang
4
French slang question? (eighteenth-century)
3
How to say "faire un rot" in a slang way?
3
What is the slang meaning of chatière?
7
What does the symbol +=+ mean in French slang?
2
Abbreviations like HTH (hope that helps) for Internet and messaging slang
0
What is a French equivalent for the office slang phrase "knife and fork it (the problem)"?